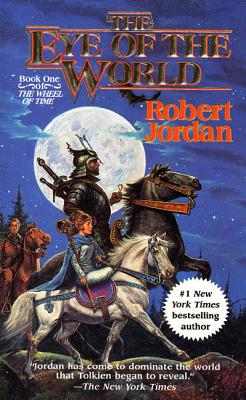 Moiraine Damodred arrives in Emond’s Field on a quest to find the one prophesized to stand against The Dark One, a malicious entity sowing the seeds of chaos and destruction. When a vicious band of half-men, half beasts invade the village seeking their master’s enemy, Moiraine persuades Rand al’Thor and his friends to leave their home and enter a larger unimaginable world filled with dangers waiting in the shadows and in the light.

Since its debut in 1990, The Wheel of Time® has captivated millions of readers around the globe with its scope, originality, and compelling characters.

“The Eye of the World is the best of its genre.” – The Ottawa Citizen


“A splendid tale of heroic fantasy, vast in scope, colorful in detail, and convincing in its presentation of human character and personality.” – L. Sprague de Camp


“This one is as solid as a steel blade and glowing with the true magic. Robert Jordan deserves congratulations.” – Fred Saberhagen


“One hell of a story. [It] kept me up past my bedtime for three nights running— and it’s been a long time since a novel’s done that.” – Baird Searles, Asimov’s Science Fiction


“A future collector’s item. Jordan has brought out a completely new allegory in a fantasy concept that goes even beyond this massive story, working with an artist’s eye and the sense of responsibility of a serious historian.” – Gordon R. Dickson


“Classic oppositions are brought into play: initiates versus innocents, good versus evil, the spiritual power of women versus that of men. The travelers themselves are full of subtleties and shadows—ordinary villagers who, thrust into cosmic conflict, are unable to abandon their simple human desires and fears.
“This intricate allegorical fantasy recalls the works of Tolkien because of its intensity and warmth.” – Publisher’s Weekly

“Robert Jordan has come to dominate the world Tolkien began to reveal.” – The New York Times


“This has magic and pacing and detail and human involvement, with a certain subtlety of a presentation and a grand central vision. Robert Jordan… is a lot of writer!” – Piers Anthony


“An exciting story; the reader is drawn in early and kept there until the last page. There is adventure and mystery and dark things that move in the night-- a combination of Robin Hood and Stephen King that is hard to resist… Jordan makes the reader care about these characters as though they were old friends; so much so that the reader will put down the book regretting the wait for the next title in the series.” – Milwaukee Journal Sentinel


“A classic fantasy tale of the struggle between light and darkness, good and evil, death and life. Goodness, life, and light are always in retreat, always about to be defeated, but never quite! Don’t miss it!” – Andrew M. Greeley


“Certainly a title I want to add to my permanent collection, and I shall be eagerly awaiting the sequel, which is promised at the end.” – Andre Norton