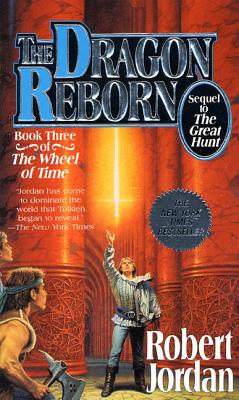 Book Three of 'The Wheel of Time'

In The Dragon Reborn, the third novel in Robert Jordan’s #1 New York Times bestselling epic fantasy series, The Wheel of Time®, Rand al’Thor undertakes a journey to prove himself worthy of being the Champion of Light.

Winter has stopped the war—almost—yet men are dying, calling out for the Dragon. But where is he?

Rand al’Thor has been proclaimed the Dragon Reborn. Traveling to the great fortress known as the Stone of Tear, he plans to find the sword Callandor, which can only be wielded by the Champion of Light, and discover if he truly is destined to battle The Dark One. Following Rand, Moiraine and their friends battle Darkhounds on the hunt, hoping they reach the Heart of the Stone in time for the next great test awaiting the Dragon Reborn.


Praise For The Dragon Reborn: Book Three of 'The Wheel of Time'…

“An exciting, well-written adventure. Jordan offers distinctive heroes and themes, including an interesting look at relations between the sexes.”—Milwaukee Sentinel


“Jordan’s writing is clear and his vision is fascinating, as are the philosophies which run his characters. And speaking of characters, a more interesting bunch I would be hard put to name… The Dragon Reborn will be one of the books to read this year.” – Seven Sawicki, Science Fiction Review


“Jordan has created a world where everything fits together… his characters follow their own personalities rather than types, and his settings are presented with detail that belief is easy.” – The Herald-Leader, Lexington, Kentucky


“Robert Jordan’s latest book is a fine one, filled with the cleverness, imagination and wonderfully drawn characters expected… Jordan’s skill as a writer doubles the pleasure. … THE DRAGON REBORN is on a higher plane than most fantasy novels.” – The Post and Courier, Charleston, South Carolina


“[The Wheel of Time] continues to exhibit a freshness that makes it a welcome addition to any… fantasy collection.” – Library Journal


“A complex tapestry of fascinating characters, descriptive details and events. I highly recommend this series to anyone who loves epic fantasy.” – Carol Lynn Ukockis, Galactic Dispatch