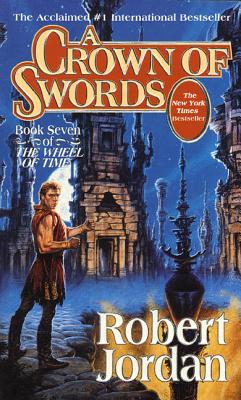 
“His writing is distinguished as literature by the richness of its fabric, with all the charm and naïveté of the Brothers Grimm and the social/moral commentary of Huxley’s Brave New World. With his well fleshed out characters, dark imagery, comic relief, vivid landscapes, and a fascinating sense of timelessness, Jordan has created a complex literature with a language and reality all of its own.” – Brewster Milton Robertson, Myrtle Beach Sun-News


Praise for The Wheel of Time


“The Wheel of Time [is] rapidly becoming the definitive American fantasy saga. It is a fantasy ale seldom equaled and still less often surpassed in English.” – Chicago Sun-Times


Praise for A Crown of Swords


“The seventh volume of Jordan’s bestselling high fantasy series carries on the colossal, dauntingly complex storytelling established by the previous entries… Fans of the series will gobble down this generous addition.” – Publishers Weekly (starred review)


“In the long-awaited sequel to the bestselling Lord of Chaos, Jordan returns to the [same] complex, detailed fantasy world… Highly recommended…” – Library Journal


“In the seventh volume of Jordan’s preeminent high fantasy saga, intrigue and counter-intrigue continue to roil… This latest installment of a major fantasy epic definitely will not disappoint its fans.” -- Booklist