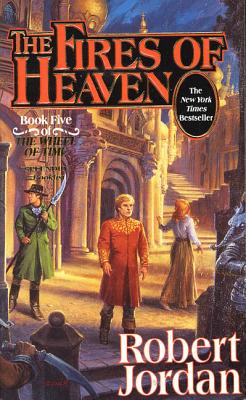 The Fires of Heaven

Book Five of 'The Wheel of Time'

In The Fires of Heaven, the fifth novel in Robert Jordan’s #1 New York Times bestselling epic fantasy series, The Wheel of Time®, four of the most powerful Forsaken band together against the Champion of Light, Rand al’Thor.

Prophesized to defeat the Dark One, Rand al'Thor, the Dragon Reborn, has upset the balance of power across the land. Shaido Aiel are on the march, ravaging everything in their path. The White Tower's Amyrlin has been deposed, turning the Aes Sedai against one another. The forbidden city of Rhuidean is overrun by Shadowspawn.

Despite the chaos swirling around him, Rand continues to learn how to harness his abilities, determined to wield the One Power--and ignoring the counsel of Moiraine Damodred at great cost.


Praise For The Fires of Heaven: Book Five of 'The Wheel of Time'…

Praise for Robert Jordan’s The Wheel of Time

Book One: THE EYE OF THE WORLD

“New readers are advised to start with the first book, The Eye of the World. It may take you a year of steady reading, but by the next year you’ll be chomping at the bit to jump on the [newest] book.” – Robert Knox, MPG Newspapers

“On very rare occasions, very talented storytellers create worlds that are beyond fantasy; worlds that become realities. Robert Jordan has.” – Morgan Llywelyn, author of Lion of Ireland and Druids

“One of the books to read this year.” – Science Fiction Review

“The fourth volume of the most ambitious American fantasy saga continues to suggest that The Wheel of Time will also be the finest.” – Booklist

Book Five: THE FIRES OF HEAVEN