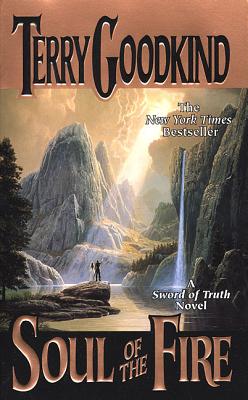 A Sword of Truth Novel

Richard Rahl has traveled far from his roots as a simple woods guide. Emperor of the D'Haran Empire, war wizard, the Seeker of Truth--none of these roles mean as much to him as his newest: husband to his beloved Kahlan Amnell, Mother Confessor of the Midlands.

But their wedding day is the key that unlocks a spell sealed away long ago in a faraway country. Now a deadly power pours forth that threatens to turn the world into a lifeless waste.

Separated from the Sword of Truth and stripped of their magic, Richard and Kahlan must journey across the Midlands to discover a dark secret from the past and a trap that could tear them apart forever. For their fate has become inextricably entwined with that of the Midlands--and there's no place so dangerous as a world without magic...in Terry Goodkind's spellbinding Soul of the Fire.


Praise For Soul of the Fire: A Sword of Truth Novel…