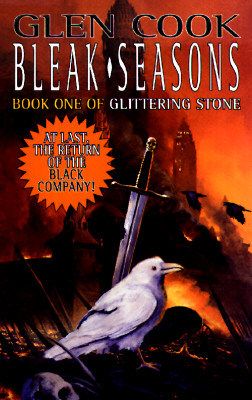 "Let me tell you who I am, on the chance that these scribblings do survive....I am Murgen, Standard bearer of the Black Company, though I bear the shame of having lost that standard in battle. I am keeping these Annals because Croaker is dead., One-Eye won't, and hardly anyone else can read or write. I will be your guide for however long it takes the Shadowlanders to force our present predicament to its inevitable end..."

So writes Murgen, seasoned veteran of the Black Company. The Company has taken the fortress of Stormgard from the evil Shadowlanders, lords of darkness from the far reaches of the earth. Now the waiting begins.

Exhausted from the siege, beset by sorcery, and vastly outnumbered, the Company have risked their souls as well as their lives to hold their prize. But this is the end of an age, and great forces are at work. The ancient race known as the Nyueng Bao swear that ancient gods are stirring. the Company's commander has gone mad and flirts with the forces of darkness. Only Murgen, touched by a spell that has set his soul adrift in time, begins at last to comprehend the dark design that has made pawns of men and god alike.

Born in 1944, Glen Cook grew up in northern California, served in the U.S. Navy, attended the University of Missouri, and was one of the earliest graduates of the well-known "Clarion" workshop SF writers. Since 1971 he has published a large number of SF and fantasy novels, including the "Dread Empire" series, the occult-detective "Garrett" novels, and the very popular "Black Company" sequence that began with the publication of "The Black Company" in 1984. Among his SF novels is "A Passage at Arms."

After working many years for General Motors, Cook now writes full-time. He lives near St. Louis, Missouri, with his wife Carol.
Loading...
or
Not Currently Available for Direct Purchase