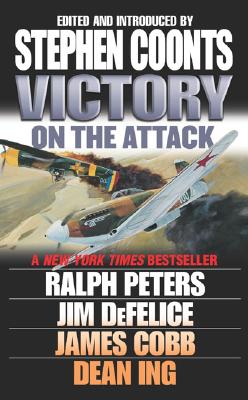 Ralph Peters follows a German officer in the starving days after World War II as he makes his way on foot back home, where a defeat far more terrible than the Allied victory awaits him.

Jim DeFelice takes us to the height of the war when information was bought dearly on both sides. When an American pilot parachutes into Germany to gather information, he lands right in the middle of the viper's nest---a place deadlier than anything he could have found in the skies above.

James Cobb sends a special detail of PBY Catalina flying boats hunting for a hidden enemy radar station that provides the Japanese Navy with an edge in the War in the Pacific.

Dean Ing takes us into the world of espionage as the Army Air Force becomes convinced that a Nazi superweapon can reach New York and Washington. As an interceptor is rush-developed, a plane-crazy young Texan begins to suspect that someone on the team has an agenda all his own . . .