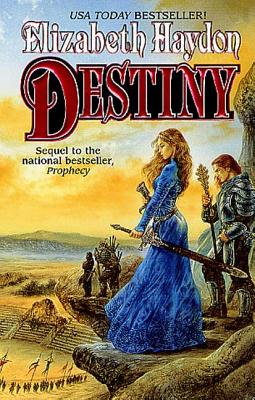 Child of the Sky (The Symphony of Ages #3)

A FELLOWSHIP OF THREE

To stand against the F'dor-- an ancient, vile being intent on destroying the world-- a fellowship has been forged: Rhapsody, a Singer of great talent and beauty; Achmed, an assassin with unearthly talents; and Grunthor, a giant of jolly disposition and lethal skill with weapons.

Driven by prophetic visions, the three know that time is running short, know that they must find their elusive enemy before his darkness consumes them all. But after their final, brutal confrontation with the F'dor, their world crosses the threshold of disaster and faces utter oblivion. The action reaches a fevered pitch, achieving a crescendo of tragedy, love, and triumph of human spirit over world-shattering cataclysm.

With death at hand and the world crumbling at their feet, these three will finally discover their true ...

As the daughter of an air force officer, ELIZABETH HAYDON began traveling at an early age and has since traveled all over the world. She draws on the imagery of these visits in The Symphony of Ages series, and blends her love of music, anthropology, herbalism and folklore into much of her writing. Haydon is also a harpist and a madrigal singer (a singer of medieval songs). She lives with her family on the East Coast.

Praise For Destiny: Child of the Sky (The Symphony of Ages #3)…

“Filled with detail and a complex, multi-faceted plotline, and readers will quickly pick up on the echoes of J.R.R. Tolkien's Middle Earth and David Eddings Belgariad series, as well as Celtic and Norse mythology, and even a dash of Mozart's Magic Flute.” —Toronto National Post & Mail
or
Not Currently Available for Direct Purchase
Copyright © 2020 American Booksellers Association