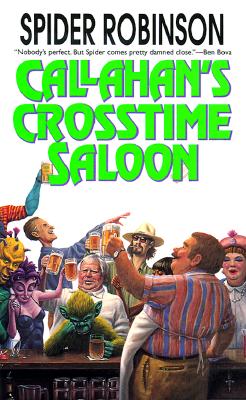 Callahan's Place is the neighborhood tavern to all of time and space, where the regulars are anything but. Pull up a chair, grab a glass of your favorite, and listen to the stories spun by time travelers, cybernetic aliens, telepaths...and a bunch of regular folks on a mission to save the world, one customer at a time.

Spider Robinson, winner of three Hugos and a Nebula, was born in the Bronx and raised on Long Island, and has been a Canadian resident for 30 years. Holder of a bachelor's degree in English from the State University of New York, he worked as a folksinger and journalist before publishing his first story in "Analog "in 1973. He now lives with his wife Jeanne Robinson (co-author of the Hugo- and Nebula-winning Stardance trilogy) on an island outside Vancouver, B.C., where they raise and exhibit hopes.

Eleven of his 31 books are set in Callahan's Place, a fabulous tavern founded by a time traveler, where puns flow as freely as beer, and smell far worse. The most recent is" Callahan's Con" [Tor July 2003]. He has contributed a regular editorial column, "Future Tense," to Canada's national newspaper, " The Globe & Mail," since 1995. In 2000, he released""Belaboring the Obvious," "a CD of original music with the legendary Amos Garrett ("Midnight at the Oasis") on lead guitar, and in 2001 he was a celebrity judge at the Cannabis Cup in Amsterdam.

"If one were given the task of creating Spider Robinson from scratch, the best way to do it would be to snatch James Joyce from history, force-feed him Marx Brothers films and good jazz for the better part of a decade, then turn him loose on a world badly in need of a look at itself."-Vancouver Sun