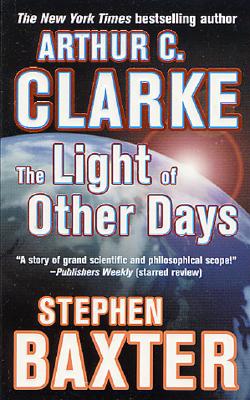 The Light of Other Days

When a brilliant, driven industrialist harnesses the cutting edge of quantum physics to enable people everywhere, at trivial cost, to see one another at all times: around every corner, through every wall, into everyone's most private, hidden, and even intimate moments. It amounts to the sudden and complete abolition of human privacy--forever.

Then, as society reels, the same technology proves able to look backwards in time as well. What happens next is a story only Arthur C. Clarke and Stephen Baxter could tell. The Light of Other Days is a novel that will change your view of what it is to be human.


Praise For The Light of Other Days…

Born in Minehead, Somerset in 1917, Arthur C. Clarke is perhaps the most celebrated science fiction author alive today. He is the author of more than sixty books with more than 50 million copies in print, and the winner of all the field's highest honors. He was named Grand Master by the Science Fiction Writers of America in 1986.

In 1945 he published the technical paper "Extra-terrestrial Relays," which in essence invented the principle of worldwide communication via geosynchronous satellite.

His well-known novels include "Childhood's End; Against the Fall of Knight; 2001: A Space Odyssey; Rendezvous with Rama; Imperial Earth; The Fountains of Paradise; 2010: Odyssey Two; 2061: Odyssey Three, "and "3001." In 1968, he collaborated with director Stanley Kubrick on the screenplay for the movie 2001: A Space Odyssey, which was derived from his story "The Sentinel."

He has lived in Colombo, Sri Lanka since 1956. He was awarded the CBE in 1989 and knighted in 1998.
Loading...
or
Not Currently Available for Direct Purchase