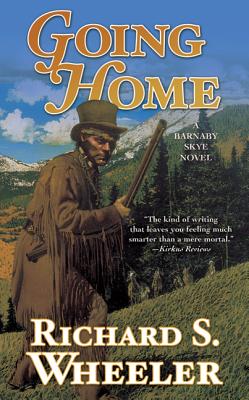 It is 1832, six years after he deserted the Royal Navy, when Barnaby Skye has a chance to return to England to clear his name and take up employment with the Hudson's Bay Company. But "Mister Skye," as he insists on being called, is as much a magnet for trouble as he is a legend among mountain men, and this opportunity of a lifetime begins to disintegrate almost from the moment it is presented to him.

With his devoted Crow wife, Victoria, an eccentric botanist named Alistair Nutmeg, and a strange pariah dog following along, Skye makes his way west to Fort Vancouver in the Oregon country to begin his journey home.

He is adept at dodging Blackfeet war parties and staving off starvation, but when the Hudson's Bay ship Cadboro makes a stopover in Mexican California, Skye's luck-generally bad to begin with-runs out. In Going Home, Skye fights Mexican bandits, murderous Pacific coastal Indians, thirst, starvation, and despair, as he learns where home really is and what honor really means.

“Skye is one of the most memorable figures in western fiction since Max Brand's 'Destry'.” —Tulsa World

“By the glorious Wheeler . . . . As a westerner, Wheeler is a writer's writer whose prose has the authority of handset type but sparkles like horseshoes on flint rock.” —Kirkus Reviews