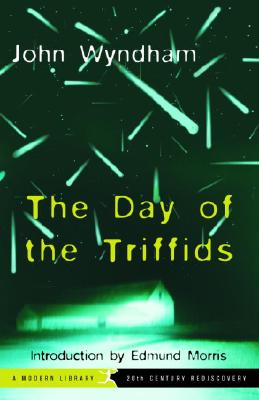 The Day of the Triffids (20th Century Rediscoveries)

In 1951 John Wyndham published his novel The Day of the Triffids to moderate acclaim. Fifty-two years later, this horrifying story is a science fiction classic, touted by The Times (London) as having “all the reality of a vividly realized nightmare.”

Bill Masen, bandages over his wounded eyes, misses the most spectacular meteorite shower England has ever seen. Removing his bandages the next morning, he finds masses of sightless people wandering the city. He soon meets Josella, another lucky person who has retained her sight, and together they leave the city, aware that the safe, familiar world they knew a mere twenty-four hours before is gone forever.

But to survive in this post-apocalyptic world, one must survive the Triffids, strange plants that years before began appearing all over the world. The Triffids can grow to over seven feet tall, pull their roots from the ground to walk, and kill a man with one quick lash of their poisonous stingers. With society in shambles, they are now poised to prey on humankind. Wyndham chillingly anticipates bio-warfare and mass destruction, fifty years before their realization, in this prescient account of Cold War paranoia.

Praise For The Day of the Triffids (20th Century Rediscoveries)…

"A thoroughly English apocalypse, it rivals H. G. Wells in conveying how the everyday invaded by the alien would feel. No wonder Stephen King admires Wyndham so much."
--RAMSEY CAMPBELL

"John Wyndham's The Day of the Triffids is one of my all-time favorite novels. It's absolutely convincing, full of little telling details, and that sweet, warm sensation of horror and mystery."
--JOE R. LANSDALE

"My son's middle name is Wyndham. Does that tell you how much I respect and revere the late John Wyndham? And The Day of the Triffids is the best of them all. He was a wonderful writer who was able to reinvigorate science fiction with spectacle and true thrills, and do so with a writing voice that created both suspense and elegance. A true master."
--ED GORMAN

John Wyndham (1903–1969) was a successful English author who wrote novels and short stories from the 1950s to the ’70s, focusing on science fiction and creating many classics still popular today, including Out of the Deep.

Edmund Morris won a Pulitzer Prize for The Rise of Theodore Roosevelt, the first in a trilogy, and the Los Angeles Times Book Prize for the sequel, Theodore Rex, both available as Modern Library Paperbacks. He lives in New York.
Loading...
or
Not Currently Available for Direct Purchase