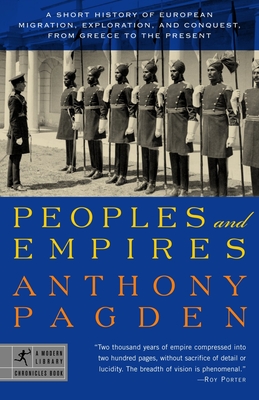 A Short History of European Migration, Exploration, and Conquest, from Greece to the Present (Modern Library Chronicles)

Written by one of the world’s foremost historians of human migration, Peoples and Empires is the story of the great European empires—the Roman, the Spanish, the French, the British—and their colonies, and the back-and-forth between “us” and “them,” culture and nature, civilization and barbarism, the center and the periphery. It’s the history of how conquerors justified conquest, and how colonists and the colonized changed each other beyond all recognition.

Anthony Pagden was educated in Santiago de Chile, London, Barcelona, and Oxford. Over the past two decades, he has been the Reader in Intellectual History at Cambridge, a fellow of King’s College, a visiting professor at Harvard, and Harry C. Black Professor of History at Johns Hopkins University. Currently a professor of political science at UCLA, he is a regular contributor to the Times Literary Supplement, The New Republic, and The New York Times.

Praise For Peoples and Empires: A Short History of European Migration, Exploration, and Conquest, from Greece to the Present (Modern Library Chronicles)…

“Two thousand years of empire compressed into two hundred pages, without sacrifice of detail or lucidity. The breadth of vision is phenomenal.” —Roy Porter

“Masterly . . . Pagden has an unerring sense of evidence, a gift of lucidity, an eye for a good story, a sharp taste for argument, and a vivid, pithy way with words. . . . He combines without obvious contrivance a survey and a story, with broad horizons and a perfect pace.” —Felipe Fernández-Armesto

“Without condescension, [Pagden] writes lucidly for the educated non-expert. Sketching a huge territory of knowledge, his compact essay belongs to a series . . . which on the strength of this volume is an admirable publishing venture indeed.” —Chicago Tribune
or
Not Currently Available for Direct Purchase
Copyright © 2020 American Booksellers Association