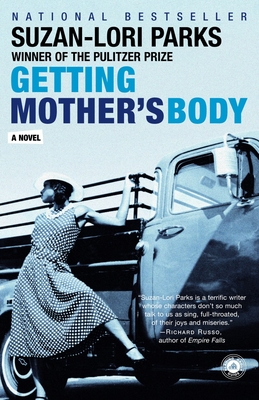 Pulitzer Prize winner Suzan-Lori Parks’s wildly original debut novel, Getting Mother’s Body, follows pregnant, unmarried Billy Beede and her down-and-out family in 1960s Texas as they search for the storied jewels buried—or were they?—with Billy’s fast-running, six-years-dead mother, Willa Mae. Getting Mother’s Body is a true spiritual successor to the work of writers such as Zora Neale Hurston and Alice Walker—but when it comes to bringing hard-luck characters to ingenious, uproarious life, Suzan-Lori Parks shares the stage with no one.

Praise For Getting Mother's Body: A Novel…

“Suzan-Lori Parks is a terrific writer whose characters don’t so much talk to us as sing, full-throated, of their joys and miseries.”
—Richard Russo, author of Empire Falls

“The kind of story that sneaks up on you and makes you care about the characters and what happens to them.”
—USA Today


“Even minor characters are vivid and unforgettable. . . . [The] chorus of voices . . . tells the interwoven story of Willa Mae and her daughter with such flair and harmony that I was compelled to keep reading.”
—The Washington Post

“Of course Suzan-Lori Parks can write a mean patch of dialogue . . . but the real treat here is watching Parks experiment with setting. . . . [She is] a master of pitch and mood.”
—Entertainment Weekly

“With material steeped in the dark side of American history and a rare gift for the vernacular, [Parks is] the sort of provocateur one might get by crossing William Faulkner with Richard Pryor. . . . Parks’s dialogue rings ribald and jazzy.”
—Vogue

Suzan-Lori Parks is a novelist, playwright, songwriter, and screenwriter. She was the recipient of the 2002 Pulitzer Prize for Drama for her play Topdog/ Underdog, as well as a 2001 MacArthur “genius grant.” Her other plays include Fucking A, In the Blood, The America Play, Venus, and The Death of the Last Black Man in the Whole Entire World. Her first feature film, Girl 6, was directed by Spike Lee. A graduate of Mount Holyoke College, where she studied with James Baldwin, she has taught creative writing in universities across the country, including at the Yale School of Drama, and she heads the Dramatic Writing Program at CalArts. She is currently writing an adaptation of Toni Morrison’s novel Paradise for Oprah Winfrey, and the musical Hoopz for Disney. She lives in Venice Beach, California, with her husband, blues musician Paul Scher, and their pit bull, Lambchop.
Loading...
or support indie stores by buying on