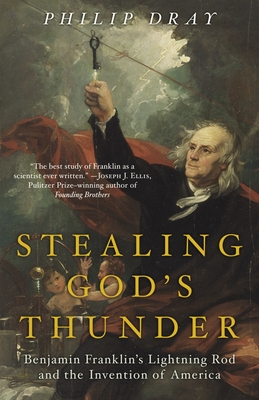 Benjamin Franklin's Lightning Rod and the Invention of America

“Dray captures the genius and ingenuity of Franklin’s scientific thinking and then does something even more fascinating: He shows how science shaped his diplomacy, politics, and Enlightenment philosophy.”
–Walter Isaacson, author of Benjamin Franklin: An American Life

Today we think of Benjamin Franklin as a founder of American independence who also dabbled in science. But in Franklin’s day, the era of Enlightenment, long before he was an eminent statesman, he was famous for his revolutionary scientific work. Pulitzer Prize finalist Philip Dray uses the evolution of Franklin’s scientific curiosity and empirical thinking as a metaphor for America’s struggle to establish its fundamental values. He recounts how Franklin unlocked one of the greatest natural mysteries of his day, the seemingly unknowable powers of lightning and electricity. Rich in historical detail and based on numerous primary sources, Stealing God’s Thunder is a fascinating original look at one of our most beloved and complex founding fathers.

PHILIP DRAY is the author of At the Hands of Persons Unknown: The Lynching of Black America, which won the Robert F. Kennedy Memorial Book Award and the Southern Book Critics Circle Award for Nonfiction and was a finalist for the Pulitzer Prize. He lives in Brooklyn, New York.

“The best study of Franklin as a scientist ever written.”
–Joseph J. Ellis, Pulitzer Prize-winning author of Founding Brothers

“Absorbing . . . There are other Franklins–the entrepreneur, the diplomat, the statesman, the architect of independence– but in Franklin the scientist, Mr. Dray may have found the happiest one of all.”
–The New York Times

“Delightful . . . Dray offers a survey of Ben Franklin’s scientific career, describing both the ridicule and glory that his experiments inspired.”
–The Wall Street Journal