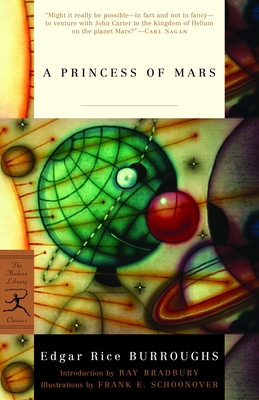 A Princess of Mars

Virginia gentleman John Carter, unexpectedly transported to the perilous red planet, Mars, finds himself captured by the loveless Green Men of Thark. As Carter struggles to win his freedom—and the affections of fellow captive Dejah Thoris, princess of the rival clan of Helium—the fate of the entire planet hangs in the balance: warring Martian tribes collide and the beleaguered Atmosphere Factory grinds to a suffocating halt. Ray Bradbury, reminiscing on the enduring thrill of Burroughs’s Martian adventure, writes, “I stood on the lawns of summer, raised my hands, and cried for Mars, like John Carter, to take me home. I flew to the Red Planet and never returned.”

Praise For A Princess of Mars: A Barsoom Novel (Modern Library Classics)…

“Might it really be possible—in fact and not in fancy—to venture with John Carter to the Kingdom of Helium on the planet Mars?”—Carl Sagan

Ray Bradbury is the renowned author of numerous novels, plays, and short stories, including The Martian Chronicles, Fahrenheit 451, Dandelion Wine, and the screenplay for John Huston’s 1956 film Moby Dick. He lives in Los Angeles with one wife, three cats, four daughters, and eight grandchildren.
Loading...
or
Not Currently Available for Direct Purchase