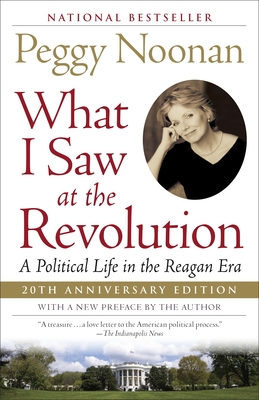 What I Saw at the Revolution (Paperback)

A Political Life in the Reagan Era

On the hundredth anniversary of Ronald Reagan’s birth comes the twentieth-anniversary edition of Peggy Noonan’s critically acclaimed bestseller What I Saw at the Revolution, for which she provides a new Preface that demonstrates this book’s timeless relevance. As a special assistant to the president, Noonan worked with Ronald Reagan—and with Vice President George H. W. Bush—on some of their most memorable speeches. Noonan shows us the world behind the words, and her sharp, vivid portraits of President Reagan and a host of Washington’s movers and shakers are rendered in inimitable, witty prose. Her priceless account of what it was like to be a speechwriter among bureaucrats, and a woman in the last bastion of male power, makes this a Washington memoir that breaks the mold—as spirited, sensitive, and thoughtful as Peggy Noonan herself.

Peggy Noonan was a special assistant to President Ronald Reagan from 1984 to 1986; in 1988, she was chief speechwriter to Vice President George Bush during his campaign for presidency; in 1989, she left Washington, D.C., for her native New York, where she completed her first book, the bestselling What I Saw at the Revolution: A Political Life in the Reagan Years. Since that time, her articles and essays have appeared in Time, Newsweek, The New York Times, The Washington Post, Forbes, and many other publications. She is also author of The Case Against Hillary Clinton, a #1 New York Times bestseller. Currently, she is a columnist and contributing editor at The Wall Street Journal and a political contributor for Fox News. She lives in New York City.

Praise For What I Saw at the Revolution: A Political Life in the Reagan Era…

“A welcome oasis in the desert of political memoirs... likely to be the most honest, lucid and enjoyable look at the Reagan White House that we’ll get.”
—The Dallas Morning News

“An engaging book, the story of how a plucky and talented young person literally wrote her way into a previously all-male domain.”
—The Washington Post Book World