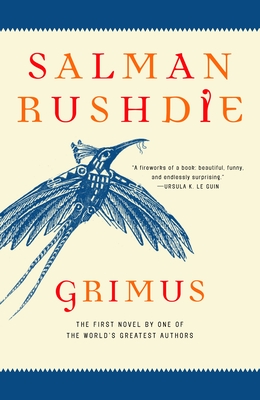 “A mixture of science fiction and folktale, past and future, primitive and present-day . . . Thunderous and touching.”
–Financial Times

After drinking an elixir that bestows immortality upon him, a young Indian named Flapping Eagle spends the next seven hundred years sailing the seas with the blessing–and ultimately the burden–of living forever. Eventually, weary of the sameness of life, he journeys to the mountainous Calf Island to regain his mortality. There he meets other immortals obsessed with their own stasis and sets out to scale the island’s peak, from which the mysterious and corrosive Grimus Effect emits. Through a series of thrilling quests and encounters, Flapping Eagle comes face-to-face with the island’s creator and unwinds the mysteries of his own humanity. Salman Rushdie’s celebrated debut novel remains as powerful and as haunting as when it was first published more than thirty years ago.

“A book to be read twice . . . [Grimus] is literate, it is fun, it is meaningful, and perhaps most important, it pushes the boundaries of the form outward.”
–Los Angeles Times

Praise For Grimus: A Novel…

“A mixture of science fiction and folktale, past and future, primitive and present-day. . . . Thunderous and touching.” —Financial Times

“Grimus is one of those novels some people will say is too good to be science fiction, even though it contains other universes, dimensional doorways, alien creatures, and more than one madman. . . . A book to be read twice . . . Grimus is science fiction in the best sense of the word. It is literate, it is fun, it is meaningful, and perhaps most important, it pushes the boundaries of the form outward.” —Los Angeles Times