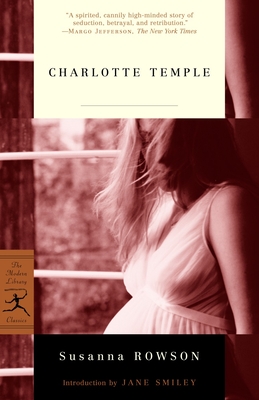 With an Introduction by Jane Smiley

First published in America in 1794, Charlotte Temple took the country by storm—in fact, it was this nation’s first bona fide “bestseller.” Susanna Rowson’s most famous work is the story of an innocent British schoolgirl who takes the advice of her depraved French teacher— with tragic consequences. Seduced by the dashing Lieutenant Montraville, who persuades her to move to America with him, the fifteen-year-old Charlotte leaves her adoring parents and makes the treacherous sea voyage to New York. In the land of opportunity, Charlotte is callously abandoned by Montraville. Alone and pregnant with an illegitimate child, she valiantly fights to stave off poverty and ruin.

This Modern Library Paperback Classic is set from the text of the first American edition.

JANE SMILEY is the bestselling author of eleven acclaimed works of fiction, including The Age of Grief, The Greenlanders, A Thousand Acres (for which she was awarded the Pulitzer Prize), Horse Heaven, and Good Faith. She lives in California.