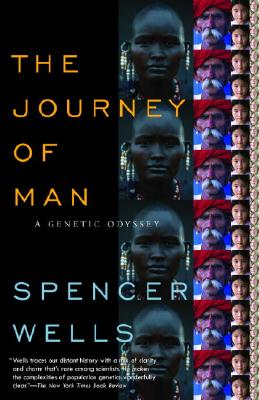 The Journey of Man

Around 60,000 years ago, a man genetically identical to us lived in Africa. Every person alive today is descended from him. How did this real-life Adam wind up as the father of us all? What happened to the descendants of other men who lived at the same time? And why, if modern humans share a single prehistoric ancestor, do we come in so many sizes, shapes, and races?
Examining the hidden secrets of human evolution in our genetic code, Spencer Wells reveals how developments in the revolutionary science of population genetics have made it possible to create a family tree for the whole of humanity. Replete with marvelous anecdotes and remarkable information, from the truth about the real Adam and Eve to the way differing racial types emerged, The Journey of Man is an enthralling, epic tour through the history and development of early humankind.

Praise For The Journey of Man: A Genetic Odyssey…

“Written with much verve, easy to read, and up-to-date on many important developments.”
—Luigi Luca Cavalli-Sforza, Stanford University, author of The History and Geography of Human Genes and Genes, Peoples, and Languages


"Spencer Wells, whose genetic work has contributed to our understanding of human prehistory, has provided an account of the spread and mixing of the human species from its origin in Africa that is both scientifically accurate and accessible to the nonscientist.”
—Richard Lewontin, Harvard University, author of It Ain’t Necessarily So: The Dream of the Human Genome and Other Illusions


“Wells traces our distant history with a mix of clarity and charm that’s rare among scientists. He makes the complexities of population genetics wonderfully clear.”
—The New York Times Book Review