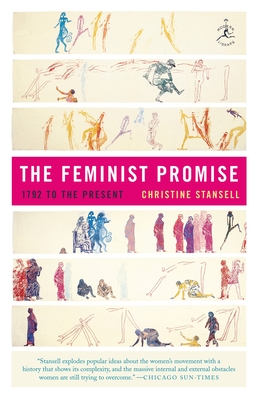 In this definitive volume, respected historian Christine Stansell tells the story of one of the great democratic movements of our times. She paints richly detailed portraits of well-known leaders—Mary Wollstonecraft, Elizabeth Cady Stanton, Betty Friedan—but others, too, appear in a new light, including Ruth Bader Ginsburg and Toni Morrison. Accounting for the failures of feminism as well as the successes, Stansell notes the emergence in the early 1900s of the dashing “New Woman”; the passing of the Nineteenth Amendment, which granted women the right to vote; the post–World War II collapse of suburban neo-Victorianism; the radical feminism of the 1960s; and the fight for women’s rights in developing countries in the era of international feminist movements. A soaring work, The Feminist Promise is bound to become an authoritative source on this essential subject for decades to come.

Praise For The Feminist Promise: 1792 to the Present…

“Stansell explodes popular ideas about the women’s movement with a history that shows its complexity, and the massive internal and external obstacles women are still trying to overcome.”—Chicago Sun-Times

“A unique, elegant, learned sweep through more than two centuries of women’s efforts to overcome the most fundamental way that human beings have been wrongly divided into the leaders and the led. It’s full of surprises from the past and guiding lights for the future.”—Gloria Steinem

“Thrilling . . . a bold, brimming history . . . reminiscent of The Second Sex in its elegant gallop through centuries and cultures.”—The Texas Observer

Christine Stansell is the Stein-Freiler Distinguished Professor of History at the University of Chicago. Her previous books include City of Women: Sex and Class in New York 1789–1860. Among other awards, Stansell has received a John Simon Guggenheim Foundation Fellowship. She has been a fellow at the Institute for Advanced Study in Princeton, New Jersey, and the Mary Bunting Fellow at the Radcliffe Institute for Advanced Study.
Loading...
or
Not Currently Available for Direct Purchase