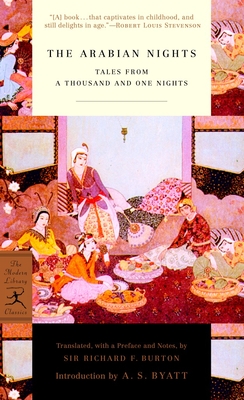 Tales from a Thousand and One Nights (Modern Library Classics)

Richard Burton (Translated by), A. S. Byatt (Introduction by)

Full of mischief, valor, ribaldry, and romance, The Arabian Nights has enthralled readers for centuries. These are the tales that saved the life of Shahrazad, whose husband, the king, executed each of his wives after a single night of marriage. Beginning an enchanting story each evening, Shahrazad always withheld the ending: A thousand and one nights later, her life was spared forever.

This volume reproduces the 1932 Modern Library edition, for which Bennett A. Cerf chose the most famous and representative stories from Sir Richard F. Burton's multivolume translation, and includes Burton's extensive and acclaimed explanatory notes. These tales, including Alaeddin; or, the Wonderful Lamp, Sinbad the Seaman and Sinbad the Landsman, and Ali Baba and the Forty Thieves, have entered into the popular imagination, demonstrating that Shahrazad's spell remains unbroken.

Praise For The Arabian Nights: Tales from a Thousand and One Nights (Modern Library Classics)…

"[A] book...that captivates in childhood, and still delights in age."

A. S. Byatt is the author of The Biographer's Tale, Elementals, and the Booker Prize winning novel Possession, among other books. She lives in London.
Loading...
or support indie stores by buying on