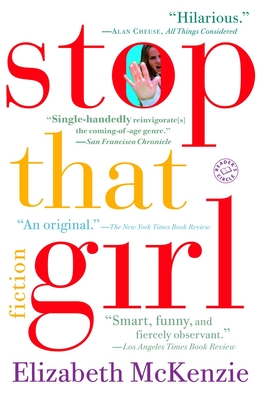 From the start of Elizabeth McKenzie’s beguiling fiction debut, we are drawn into the offbeat worldview of sharp-eyed, intrepid Ann Ransom. Stop That Girl chronicles Ann’s colorful coming-of-age travails, from her childhood in a disjointed family through her tender adolescence and beyond. Along the way, she discovers the absurdities that lurk around every corner of a young woman’s life, by way of oafish neighbors, overzealous boyfriends, prurient vegetable salesmen, sour landlords, and an iconoclast grandmother, known even to her family as Dr. Frost. Keenly funny and highly original, Stop That Girl is a brilliant examination of the exigencies of love and the fragile fabric of family, and heralds the emergence of a remarkable new voice in fiction.

Elizabeth McKenzie's writing has appeared in The New York Times, Best American Nonrequired Reading, Pushcart Prize XXV, Other Voices, Threepenny Review, TriQuarterly, and ZYZZYVA . Her stories have been performed at Symphony Space in New York and Stories on Stage in Chicago, and recorded for NPR's "Selected Shorts." A former staff editor at The Atlantic Monthly, she lives in Santa Cruz, California.

Praise For Stop That Girl: Fiction…

“Elizabeth McKenzie is an accomplished humorist and a developed stylist, and she wastes no time dazzling the reader with her clean direct language, her simple but searing use of metaphor and her unflinching eye.”
–The New York Times Book Review

“A smart, swift-paced debut . . . Ann embraces life with a wary insight that couldn’t be more engaging.”
–O: The Oprah Magazine

“Candid, perceptive . . . [McKenzie’s] tales flail with reckless energy. . . . Appealingly idiosyncratic, sharpened throughout by a keen sense of humor.”
–The Village Voice
or support indie stores by buying on
(This book is on backorder)
Copyright © 2020 American Booksellers Association