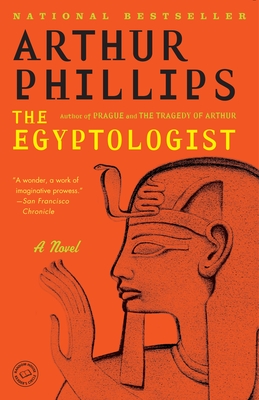 From the bestselling author of Prague comes a witty, inventive, brilliantly constructed novel about an Egyptologist obsessed with finding the tomb of an apocryphal king. This darkly comic labyrinth of a story opens on the desert plains of Egypt in 1922, then winds its way from the slums of Australia to the ballrooms of Boston by way of Oxford, the battlefields of the First World War, and a royal court in turmoil.

Just as Howard Carter unveils the tomb of Tutankhamun, making the most dazzling find in the history of archaeology, Oxford-educated Egyptologist Ralph Trilipush is digging himself into trouble, having staked his professional reputation and his fiancée’s fortune on a scrap of hieroglyphic pornography. Meanwhile, a relentless Australian detective sets off on the case of his career, spanning the globe in search of a murderer. And another murderer. And possibly another murderer. The confluence of these seemingly separate stories results in an explosive ending, at once inevitable and utterly unpredictable.

Arthur Phillips leads this expedition to its unforgettable climax with all the wit and narrative bravado that made Prague one of the most critically acclaimed novels of 2002. Exploring issues of class, greed, ambition, and the very human hunger for eternal life, this staggering second novel gives us a glimpse of Phillips’s range and maturity–and is sure to earn him further acclaim as one of the most exciting authors of his generation.

Praise For The Egyptologist: A Novel…

“A wildly pleasurable, dazzling reading experience, big in heart and execution: crazed, ecstatic, and entertaining in the deepest sense of the word. Arthur Phillips is a terrifically talented writer, and these pages overflow with wit, mad humor, and, finally, a deep undercurrent of pathos.”
–GEORGE SAUNDERS, author of Pastoralia and Civil War Land in Bad Decline

“The dueling voices of a nostalgic detective and the monomaniacal archaeologist he pursues around the world are only part of the treasure contained in The Egyptologist. Crafted with nuanced erudition and literary flair, Phillips uncovers the hieroglyphs (not hieroglyphics–but you’ll learn that) and building blocks beneath how we construct, interpret, and trust our storytellers. Highly textured, quirky, serpentine, surprising.”
–MATTHEW PEARL, author of The Dante Club

Arthur Phillips is the internationally bestselling author of three New York Times Notable Books—Prague, the winner of the Los Angeles Times/Art Seidenbaum Award for First Fiction; The Song Is You; and The Tragedy of Arthur—and The Egyptologist. He lives in New York.
Loading...
or support indie stores by buying on
(This book is on backorder)