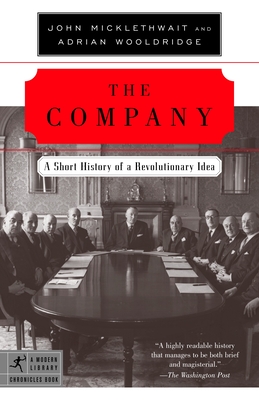 A Short History of a Revolutionary Idea (Modern Library Chronicles #12)

With apologies to Hegel, Marx, and Lenin, the basic unit of modern society is neither the state, nor the commune, nor the party; it is the company. From this bold premise, John Micklethwait and Adrian Wooldridge chart the rise of one of history’s great catalysts for good and evil.

In a “fast-paced and well-written” work (Forbes), the authors reveal how innovations such as limitations on liability have permitted companies to rival religions and even states in importance, governing the flow of wealth and controlling human affairs–all while being largely exempt from the rules that govern our lives.

The Company is that rare, remarkable book that fills a major gap we scarcely knew existed. With it, we are better able to make sense of the past four centuries, as well as the events of today.

Praise For The Company: A Short History of a Revolutionary Idea (Modern Library Chronicles #12)…

Praise for The Company by John Micklethwait and Adrian Wooldridge


“Remarkable . . . True believers in the free market faith and heretics alike will profit from knowing this history.”
–San Francisco Chronicle

“A swashbuckling journey through the past and into the future of the modern company.”
–Los Angeles Times

The authors take up [the corporation’s] tale with brio and wit . . . . Worthwhile for almost anyone with an interest in the subject.”
–The Wall Street Journal

“The limited-liability joint-stock company is a very marvel of the modern world economy, a historical force to rival religions, monarchies, and even states. The Company tells the colorful story of its birth and maturation—and its pervasive social and cultural consequences—with rare concision and flair.”
—David M. Kennedy, author of Freedom from Fear and professor of history at Stanford University

“A fascinating and delightful investigation both of how the guilds and ‘corporate persons’ of the Middle Ages turned into the institution from which so many people today directly and indirectly earn their daily bread and of the issues facing the company in the twenty-first century.”
—Daniel Yergin, author of The Prize and coauthor of The Commanding Heights: The Battle for the World Economy

John Micklethwait oversees coverage of the United States for The Economist. He lives in London. Adrian Wooldridge works for The Economist in Washington, D.C. They are coauthors of A Future Perfect: The Challenge and Promise of Globalization and The Witch Doctors: Making Sense of the Management Gurus.
Loading...
or
Not Currently Available for Direct Purchase