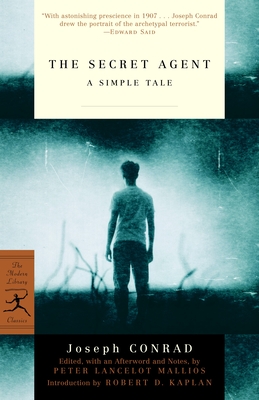 Edited and with Notes by Peter Lancelot Mallios
Introduction by Robert D. Kaplan

In reexamining The Secret Agent in a post-9/11 world, Robert D. Kaplan praises Joseph Conrad’s “surgical insight into the mechanics of terrorism,” calling the book “a fine example of how a savvy novelist may detect the future long before a social scientist does.”

This intense 1907 thriller–a precursor to works by Graham Greene and John le Carré–concerns a British double agent who infiltrates a cabal of anarchists. Conrad explores political and criminal intrigue in a modern society, building to a climax that the critic F. R. Leavis deemed “one of the most astonishing triumphs of genius in fiction.”

“The Secret Agent is an astonishing book. It is one of the best—and certainly the most significant—detective stories ever written.” —Ford Madox Ford

“The Secret Agent is an altogether thrilling ‘crime story’ . . . a political novel of a foreign embassy intrigue and its tragic human outcome.” —Thomas Mann

“[The Secret Agent] was in effect the world’s first political thriller—spies, conspirators, wily policemen, murders, bombings . . .  Conrad was also giving artistic expression to his domestic anxieties—his overweight wife and problem child, his lack of money, his inactivity, his discomfort in London, his uneasiness in English society, his sense of exile, of being an alien . . . The novel has the perverse logic and derangement of a dream.”
—from the Introduction to the Everyman's Library edition by Paul Theroux