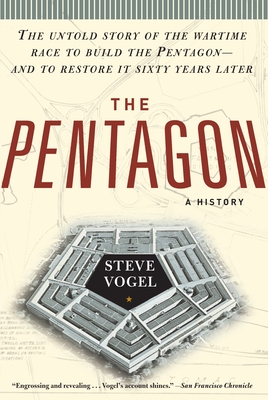 The creation of the Pentagon in seventeen whirlwind months during World War II is one of the great construction feats in American history, involving a tremendous mobilization of manpower, resources, and minds. In astonishingly short order, Brigadier General Brehon B. Somervell conceived and built an institution that ranks with the White House, the Vatican, and a handful of other structures as symbols recognized around the world. Now veteran military reporter Steve Vogel reveals for the first time the remarkable story of the Pentagon’s construction, from it’s dramatic birth to its rebuilding after the September 11 attack.

At the center of the story is the tempestuous but courtly Somervell–“dynamite in a Tiffany box,” as he was once described. In July 1941, the Army construction chief sprang the idea of building a single, huge headquarters that could house the entire War Department, then scattered in seventeen buildings around Washington. Somervell ordered drawings produced in one weekend and, despite a firestorm of opposition, broke ground two months later, vowing that the building would be finished in little more than a year. Thousands of workers descended on the site, a raffish Virginia neighborhood known as Hell’s Bottom, while an army of draftsmen churned out designs barely one step ahead of their execution. Seven months later the first Pentagon employees skirted seas of mud to move into the building and went to work even as construction roared around them. The colossal Army headquarters helped recast Washington from a sleepy southern town into the bustling center of a reluctant empire.

Vivid portraits are drawn of other key figures in the drama, among them Franklin D. Roosevelt, the president who fancied himself an architect; Secretary of War Henry L. Stimson and Army Chief of Staff General George C. Marshall, both desperate for a home for the War Department as the country prepared for battle; Colonel Leslie R. Groves, the ruthless force of nature who oversaw the Pentagon’s construction (as well as the Manhattan Project to create an atomic bomb); and John McShain, the charming and dapper builder who used his relationship with FDR to help land himself the contract for the biggest office building in the world.

The Pentagon’s post-World War II history is told through its critical moments, including the troubled birth of the Department of Defense during the Cold War, the tense days of the Cuban Missile Crisis, and the tumultuous 1967 protest against the Vietnam War. The pivotal attack on September 11 is related with chilling new detail, as is the race to rebuild the damaged Pentagon, a restoration that echoed the spirit of its creation.

This study of a single enigmatic building tells a broader story of modern American history, from the eve of World War II to the new wars of the twenty-first century. Steve Vogel has crafted a dazzling work of military social history that merits comparison with the best works of David Halberstam or David McCullough. Like its namesake, The Pentagon is a true landmark.

"Among books dealing with seemingly impossible engineering feats, this easily ranks with David McCullough’s The Great Bridge and The Path Between the Seas, as well as Ross King’s Brunelleschi’s Dome." -Kirkus Reviews (Starred Review)
"Vogel artfully weaves architectural and cultural history, thus creating a brilliant and illuminating study of this singular (and, in many ways, sacred) American space." -Publishers Weekly (Starred Review)
"An amazing story, expertly researched and beautifully told. Part history, part adventure yarn, The Pentagon is above all else the biography of an American icon." -Rick Atkinson, Pulitzer Prize winning author of An Army at Dawn
"This book, like the Pentagon itself, is a stunning and monumental achievement." –Andrew Carroll, editor of the New York Times bestsellers, War Letters and Behind the Lines
"Superb! Not only the best biography of a building ever written, but a fascinating look at the human architecture behind the Pentagon--the saints and scoundrels of our national defense. With his decades of experience covering the military and a web of insider connections, Steve Vogel has produced a book that's not only timely and a treat to read, but a stellar example of how to write history in the twenty-first century." -Ralph Peters, author of Never Quit The Fight
“This concrete behemoth – the largest office building in the world – is also the product of considerable human ingenuity and resourcefulness, as Steve Vogel amply demonstrates in his interesting account…  This is not, of course, the first account of the [9/11] attack, but with its Clancyesque action and firsthand detail… it is surely the most vivid.” — Witold Rybczynski, The New York Times Book Review , June 10, 2007

"Vogel's account shines . . . . [A]n engrossing and revealing account. . . . Vogel provides a first-rate account of the transformation of a dilapidated Arlington neighborhood into what Norman Mailer called "the true and high church of the military industrial complex."  -- Yonatan Lupu, The San Francisco Chronicle, June 10, 2007

“The saga of the construction of the Pentagon, skillfully recounted by Steve
Vogel, a military reporter on the Washington Post, is as enthralling as it
is improbable. . . . It was one of the greatest engineering feats of the
20th century–driven by the intelligence and willpower of larger-than-life
figures prepared to cut corners and demand the impossible. Mr Vogel has
brought to our notice a thrilling achievement.”–The Economist, June 30, 2007

A Wall Street Journal selection for its 2007 summer reading list.
“THE PLOT: How the Pentagon, the world's most famous defense building, was
erected just as the U.S was pulled into World War II, and its subsequent
history, including the rebuilding after the Sept. 11 attack.
THE BACKSTORY: Mr. Vogel spent two years writing and researching the book.
"The Pentagon" has drawn rave prepublication reviews, and within Random
House there is hope that it will fill the usual summer slot for a big
history title. It's printing 30,000 copies to start.
WHAT GRABBED US: Anecdotes about the Pentagon's early days. The cafeteria
couldn't keep up with the flood of workers; security was so lax in 1972
that the Weathermen walked in and planted a bomb, which exploded in a
bathroom.”–Robert Hughes, The Wall Street Journal, May 11, 2007

“Steve Vogel's marvelous work recounts the construction of one
of the world's most iconic buildings - the Pentagon. But more compelling by
far, he relates the human stories underlying this huge construction effort.
. . .All this would of itself be enough to warrant a book but Vogel plunges on
to an appropriate second story: the terrorist assault of 9/11 and the
Pentagon's subsequent resurrection. This section of the book, due perhaps
to the proximity of the event, is all the more compelling. . .
–Frederick J. Chiaventone, New York Post, June 17, 2007

“Vogel's writing coupled with the dynamic, conflict-strewn
history of the Pentagon provides for a fascinating and comfortable read
while giving new insight into an old Washington landmark."–Roll Call, June 5, 2007

“Students, writers and historians will use The Pentagon as a
reference book for years to come. Vogel has created an admirable, timely
and immensely readable book. It is a must read for anyone who has ever
worked in the building.”  –The Pentagram, June 17, 2007

"Steve Vogel has provided two excellent books in one: an interesting
account of the frenetic effort to build the world's largest office building
in order to support the U.S. entry into World War II, and an equally
fascinating study of how the building survived and was reborn in the
renovation effort so rudely interrupted on Sept. 11, 2001. . . .
Vogel has done a great service to a historic structure and its people.
–Raymond Leach, The Virginian-Pilot, July 29, 2007

"Few major buildings were constructed in as much of a hurry and with as
many challenges as the building that is synonymous with the nation's
defense. Almost by accident, it is one of the best-known buildings in the
world. The building, of course, is the Pentagon, and its story is wonderfully told
in a new book ``The Pentagon -- A History''(Random House) by veteran
Washington Post military writer Steve Vogel. . . .Every building of any size and complexity has a story; few of them are this compelling.”
–Tom Condon, The Hartford Courant, July 22, 2007

[Vogel] "puts on display his superlative skills as a journalist with capturing
human detail. Above all, he reminds us that history is made by living
people, and he has a biographer's fascination with the details of dozens of
personalities who made the Pentagon what it is today."
–Mark Falcoff, The New York Sun, July 11, 2007

"Vogel vividly depicts the horror of those inside the  Pentagon on
September 11, 2001 and then skillfully describes the rebirth of the
Pentagon through the Phoenix Project. His intimate knowledge of the
construction process and his years of research energize these pages. . . .
[T]here is simply no better book on the massive construction - and then
restoration - of the building itself."
--Chuck Leddy, The Christian Science Monitor, July 10, 2007

Steve Vogel is a veteran military reporter for The Washington Post. His coverage of the war in Afghanistan was part of a package of Washington Post stories selected as a finalist for the 2002 Pulitzer Prize. He covered the September 11 terrorist attack on the Pentagon and subsequently reported in-depth on the victims of the attack and the building’s reconstruction. The winner of several journalism awards, Vogel covered the war in Iraq and the first Gulf War, as well as U.S. military operations in Rwanda, Somalia, and the Balkans. A graduate of the College of William and Mary, he received a master’s degree in international public policy from the Paul H. Nitze Johns Hopkins University’s School of Advanced International Studies.
Loading...
or
Not Currently Available for Direct Purchase