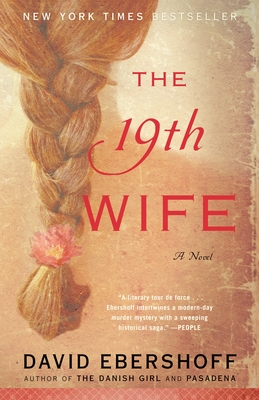 “A fascinating tale of polygamy and its effect on those who practice it. This novel really tells two tales -- that of Jordan Scott -- a young man who was thrown out of his fundamentalist sect and who is now trying to clear his mother of murder -- and that of Ann Eliza Young, the wife of Brigham Young, who went on to denounce polygamy. This is an amazingly researched, well-written novel!”
— Mary Cowen, Anderson's Bookshop, Naperville, IL
View the List

“The 19th Wife brilliantly combines two stories: one, historical fiction about Ann Eliza Young, who defies her church and husband, Brigham Young, the other a modern-day murder mystery set in Utah. Ebershoff adroitly gives the reader an understanding of a world of faith and love most of us can not comprehend, and he writes stunningly, with great depth and feeling for his characters.”
— Jane Dawson, Porter Square Books, Cambridge, MA
View the List

It is 1875, and Ann Eliza Young has recently separated from her powerful husband, Brigham Young, prophet and leader of the Mormon Church. Expelled and an outcast, Ann Eliza embarks on a crusade to end polygamy in the United States. A rich account of her family’s polygamous history is revealed, including how both she and her mother became plural wives. Yet soon after Ann Eliza’s story begins, a second exquisite narrative unfolds–a tale of murder involving a polygamist family in present-day Utah. Jordan Scott, a young man who was thrown out of his fundamentalist sect years earlier, must reenter the world that cast him aside in order to discover the truth behind his father’s death. And as Ann Eliza’s narrative intertwines with that of Jordan’s search, readers are pulled deeper into the mysteries of love, family, and faith.

Praise For The 19th Wife: A Novel…

“This lyrical yet fact-packed epic is both timely and transporting. . . . Ebershoff ’s exhaustive research and deft prose combine to make [The 19th Wife] a literary tour de force.”—People (four stars)

“Ambitious . . . fascinating . . . Ebershoff demonstrates abundant virtuosity, as he convincingly inhabits the voices of both a nineteenth-century Mormon wife and a contemporary gay youth excommunicated from the church, while also managing to say something about the mysterious power of faith.”—The New Yorker

“[The 19th Wife] evinces a respect for the difficult mysteries of faith as well as the importance of the family, however that might be defined. . . . The multiplicity of perspectives serves to broaden Ebershoff ’s depiction not only of polygamy, but also of the people whose lives it informs. And this gives his novel a rare sense of moral urgency.”—The New York Times Book Review

“As timely as it is engaging . . . Fascinating in its documentary detail, [The 19th Wife] reads like a memoir and ultimately serves to enlighten more than it condemns. . . . [Its] snappy pace and easyto-read prose allow us to fall deeper and deeper into the world of a modern Mormon polygamous cult and the twisted logic of plural marriage.”—Elle (Reader’s Prize 2008 pick)

“Dryly comic and fearlessly honest . . . The 19th Wife swirls around what it means for an individual to turn his back on faith, and what it means for a religion—Mormonism—to deny the contemporary effects of its own, long disavowed past. . . . A compelling portrait of the beginnings and ends of Mormon polygamy, and a marvelous examination of its effects on women (the obvious sufferers) and men (also brutalized, the author shows). The 19th Wife is an exploration of how and whether community is possible after a loss of belief.”—Newsday

“A skilled ventriloquist, [Ebershoff ] gives voice not only to his spirited protagonist but also to her dismayed family members, an indignant, vexed Brigham Young and impartial modern historians.”—San Francisco Chronicle

“Compelling, well-written . . . [Ebershoff ] uses fiction, like many before him, to show a deeper truth, with a much wider scope, than any separate (‘real’) look at polygamy could.”—The Denver Post

“As the mystery in David Ebershoff ’s novel The 19th Wife unfolds, so does the complexity of understanding what it means for an individual to turn his back on faith. . . . A compelling portrait of the beginnings and ends of Mormon polygamy.”—The Detroit News and Free Press

David Ebershoff is the author of the novels The 19th Wife, Pasadena, and The Danish Girl, and a short-story collection, The Rose City. His fiction has won a number of awards, including the Rosenthal Foundation Award from the American Academy of Arts and Letters, the Ferro-Grumley Award, and the Lambda Literary Award. His books have been translated into twenty languages to critical acclaim. The 19th Wife was made into a television movie and The Danish Girl is under development as a feature film. Ebershoff teaches in the graduate writing program at Columbia University and is an editor-at-large at Random House. He lives in New York City.
Loading...
or
Not Currently Available for Direct Purchase