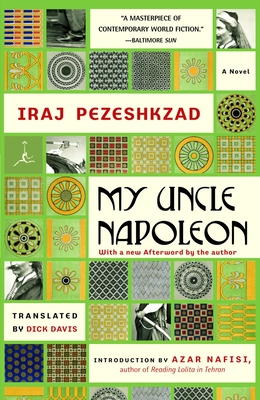 The most beloved Iranian novel of the twentieth century

“God forbid, I’ve fallen in love with Layli!” So begins the farce of our narrator’s life, one spent in a large extended Iranian family lorded over by the blustering, paranoid patriarch, Dear Uncle Napoleon. When Uncle Napoleon’s least-favorite nephew falls for his daughter, Layli, family fortunes are reversed, feuds fired up and resolved, and assignations attempted and thwarted.

First published in Iran in the 1970s and adapted into a hugely successful television series, this beloved novel is now “Suggested Reading” in Azar Nafisi’s Reading Lolita in Tehran. My Uncle Napoleon is a timeless and universal satire of first love and family intrigue.

Praise For My Uncle Napoleon: A Novel…

“A gift both to readers fascinated by other cultures and to lovers of fiction for fiction’s sake.”
–The Washington Post Book World

Readers can gain a more balanced impression of Iran from this novel, which looks at life from the kind of humorous perspective few Westerners may associate with the current regime in that country.”
–The Christian Science Monitor

“A giddily uproarious mixture of farce and slapstick.”
–The Atlantic

Iraj Pezeshkzad was born in Tehran in 1928 and educated in Iran and then France, where he received his law degree. He served as a judge in the Iranian Judiciary for five years prior to joining the Iranian Foreign Service. He began writing in the early 1950s by translating the works of Voltaire and Molière into Persian and by writing short stories for magazines.

Dick Davis is a translator, a poet, and a scholar of Persian literature who has published more than 20 books. He is currently a professor of Persian at Ohio State University and a fellow of the Royal Society of Literature. His translations from Persian include The Lion and the Throne, Fathers and Sons, and Sunset of Empire: Stories from the Shahnameh of Ferdowsi, vols. I, II, III.

Azar Nafisi is the critically acclaimed author of Reading Lolita in Tehran, a long-running #1 New York Times bestseller published in thirty-two languages, and Things I’ve Been Silent About, also a New York Times bestseller. A fellow at Johns Hopkins University’s School of Advanced International Studies, she has taught at Oxford University and several universities in Tehran.
Loading...
or support indie stores by buying on