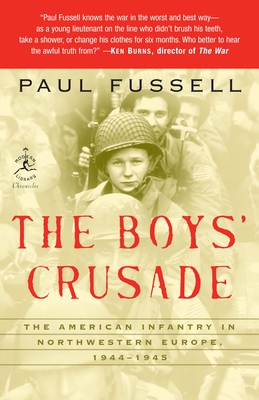 The Boys’ Crusade is the great historian Paul Fussell’s unflinching and unforgettable account of the American infantryman’s experiences in Europe during World War II. Based in part on the author’s own experiences, it provides a stirring narrative of what the war was actually like, from the point of view of the children—for children they were—who fought it. While dealing definitively with issues of strategy, leadership, context, and tactics, Fussell has an additional purpose: to tear away the veil of feel-good mythology that so often obscures and sanitizes war’s brutal essence.

“A chronicle should deal with nothing but the truth,” Fussell writes in his Preface. Accord-ingly, he eschews every kind of sentimentalism, focusing instead on the raw action and human emotion triggered by the intimacy, horror, and intense sorrows of war, and honestly addressing the errors, waste, fear, misery, and resentments that plagued both sides. In the vast literature on World War II, The Boys’ Crusade stands wholly apart. Fussell’s profoundly honest portrayal of these boy soldiers underscores their bravery even as it deepens our awareness of their experiences. This book is both a tribute to their noble service and a valuable lesson for future generations.

“This is a former warrior’s haunting meditation on the terrible, yet often necessary, destructiveness of total warfare. Written with passion and fidelity, The Boys’ Crusade is a book that will not leave you after you have put it down. If there is a more powerful personal account of the ground war in Western Europe I have yet to encounter it.” —Donald L. Miller, author of The Story of World War II

“No one writes about war with greater authenticity and eloquence than Paul Fussell. The Boys’ Crusade is an extraordinarily powerful account that is at once poignant and searing. It is a truth-telling of a very high order from one of our finest men of letters.” —Rick Atkinson, Pulitzer Prize–winning author of An Army at Dawn

Paul Fussell is the author of fifteen books, including Wartime: Understanding and Behavior in the Second World War and The Great War and Modern Memory, which won the National Book Award and the National Book Critics Circle Award and was named by the Modern Library as one of the twentieth century’s 100 best nonfiction books. He taught literature for many years at the University of Pennsylvania and Rutgers University. He lives in Philadelphia with his wife.
Loading...
or
Not Currently Available for Direct Purchase