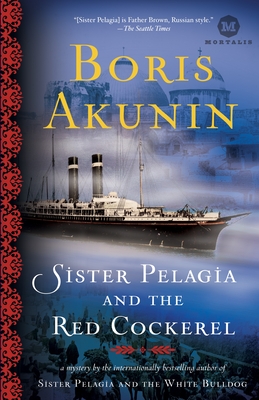 The ship carrying the devout to Jerusalem has run into rough waters. Onboard is Manuila, controversial leader of the “Foundlings,” a sect that worships him as the Messiah. But soon the polarizing leader is no longer a passenger or a prophet but a corpse, beaten to death by someone almost supernaturally strong. But not everything is as it seems, and someone else sailing has become enmeshed in the mystery: the seemingly slow but actually astute sleuth Sister Pelagia. Her investigation of the crime will take her deep into the most dangerous areas of the Middle East and Russia, running from one-eyed criminals and after such unlikely animals as a red cockerel that may be more than a red herring. To her shock, she will emerge with not just the culprit in a murder case but a clue to the earth’s greatest secret.

Sister Pelagia and the Red Cockerel features its beloved heroine’s most exciting and explosive inquiry yet, one that just might shake the foundations of her faith.

BORIS AKUNIN is the pen name of Grigory Chkhartishvili, a philologist, critic, essayist, and translator born in the republic of Georgia. He has become one of the most widely read authors in Russia.

Praise For Sister Pelagia and the Red Cockerel: A Novel…

“Splendidly smart and funny, this is half pastiche, half reinvention and wholly entertaining.” —Evening Standard, UK

“It [pleases] lovers of mysteries, as well as fans of classic Russian literature.” —USA Today

“Akunin has delivered a virtuoso performance, a mélange of mystery and horror.”—Courier-Mail, Australia
or
Buy Here
Copyright © 2020 American Booksellers Association