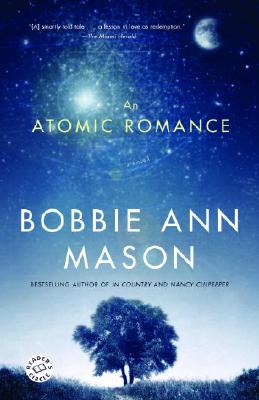 This provocative, rollicking story is the much-anticipated new novel–the first in over a decade–from acclaimed author Bobbie Ann Mason. In An Atomic Romance we meet Reed Futrell, a sexy, thoughtful hero who grapples with radioactive contamination, a midlife crisis, and string theory–all while falling in love.

Reed is an engineer at a uranium-enrichment plant near a riverside city in heartland America. He has deep roots in this community: He was raised there; his father worked at the very same plant before him. And it was here that Reed met, married, and then divorced his wife. Reed spends countless nights camping at a local wildlife preserve, gazing at the stars, fishing and hunting–that is, until deformed frogs are discovered at the site. Though his father was killed in a tragic accident at the atomic plant years ago, Reed stays on, proud to perform demanding and dangerous work for the benefit of the nation. As for the radioactive “incidents” he has endured, Reed prefers to think about other things–Hubble photographs of distant galaxies, Albert Einstein, his dog.

Reed’s casual attitude toward danger infuriates his on-again-off-again girlfriend, Julia, as much as his quirky mind and muscular body intrigue her. Julia, a biologist, is truly Reed’s match–or maybe more than his match. They both are witty, curious, and fascinated by science. Indeed, their courtship began with banter about Stephen Hawking’s theories of space-time, and ever since it has been an up-and-down adventure of sexual attraction, intellectual game-playing, and long silences when Julia refuses to return Reed’s calls.

When news reports reveal evidence of radioactive pollution in the land surrounding the plant, Reed and Julia’s relationship faces an unprecedented challenge. In An Atomic Romance, Bobbie Ann Mason delivers a brilliant novel set against a backdrop of atomic power: a love story between a motorcycle-riding loner and an independent, strong-minded biologist; between the peaceful present in a typical American community and the nation’s violent nuclear past; and, finally, between a good man and the work he takes pride in, though it may be putting his life in danger.

Praise For An Atomic Romance: A Novel…

“A novel that, like a flashbulb, burns an afterimage in our minds.”
–Michiko Kakutani, The New York Times

Shiloh and Other Stories

“Bobbie Ann Mason is one of those rare writers who, by concentrating their attention on a few square miles of native turf, are able to open up new and surprisingly wide worlds for the delighted reader.”
–The New York Review of Books

“Mason is a full-fledged master of the short story. . . . Her first collection is a treasure.”
–Anne Tyler

Bobbie Ann Mason is the author of In Country, Clear Springs, and Shiloh & Other Stories. She is the winner of the PEN/Hemingway Award, and was a finalist for the National Book Critics Circle Award, the American Book Award, the PEN/Faulkner Award, and the Pulitzer Prize. She is writer-in-residence at the University of Kentucky, and lives with her husband, Roger Rawlings.
Loading...
or
Not Currently Available for Direct Purchase