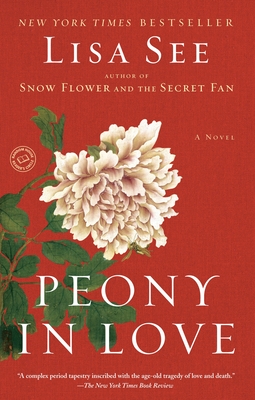 “I finally understand what the poets have written. In spring, moved to passion; in autumn only regret.”

For young Peony, betrothed to a suitor she has never met, these lyrics from The Peony Pavilion mirror her own longings. In the garden of the Chen Family Villa, amid the scent of ginger, green tea, and jasmine, a small theatrical troupe is performing scenes from this epic opera, a live spectacle few females have ever seen. Like the heroine in the drama, Peony is the cloistered daughter of a wealthy family, trapped like a good-luck cricket in a bamboo-and-lacquer cage. Though raised to be obedient, Peony has dreams of her own.

Peony’s mother is against her daughter’s attending the production: “Unmarried girls should not be seen in public.” But Peony’s father assures his wife that proprieties will be maintained, and that the women will watch the opera from behind a screen. Yet through its cracks, Peony catches sight of an elegant, handsome man with hair as black as a cave–and is immediately overcome with emotion.

So begins Peony’s unforgettable journey of love and destiny, desire and sorrow–as Lisa See’s haunting new novel, based on actual historical events, takes readers back to seventeenth-century China, after the Manchus seize power and the Ming dynasty is crushed.

Steeped in traditions and ritual, this story brings to life another time and place–even the intricate realm of the afterworld, with its protocols, pathways, and stages of existence, a vividly imagined place where one’s soul is divided into three, ancestors offer guidance, misdeeds are punished, and hungry ghosts wander the earth. Immersed in the richness and magic of the Chinese vision of the afterlife, transcending even death, Peony in Love explores, beautifully, the many manifestations of love. Ultimately, Lisa See’s new novel addresses universal themes: the bonds of friendship, the power of words, and the age-old desire of women to be heard.

Praise For Peony in Love: A Novel…

“See mines an intriguing vein of Chinese history . . . weaving fact and fiction into a dense romantic tapestry of time and place as she meditates on the meaning of love, the necessity of self-expression and the influence of art.”—Los Angeles Times

“A transporting read, to lost worlds earthly and otherwise.”—Chicago Tribune

“A quietly beautiful tale that sneaks into the reader’s heart . . . Not since Susie Salmon of Alice Sebold’s The Lovely Bones has a ghostly narrator been as believable and empathetic.”—San Antonio Express-News

“There’s much here to be savored and a great deal to be learned.”—The Washington Post Book World

Lisa See is the New York Times bestselling author of Snow Flower and the Secret Fan, Flower Net (an Edgar Award nominee), The Interior, and Dragon Bones, as well as the critically acclaimed memoir On Gold Mountain. The Organization of Chinese American Women named her the 2001 National Woman of the Year. She lives in Los Angeles. Visit the author’s website: www.LisaSee.com.
To schedule a speaking engagement, please contact American Program Bureau at www.apbspeakers.com