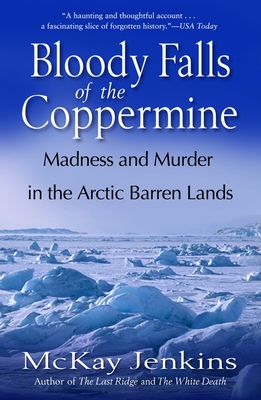 Bloody Falls of the Coppermine

Madness and Murder in the Arctic Barren Lands

In the winter of 1913, high in the Canadian Arctic, two Catholic priests set out on a dangerous mission to reach a group of Eskimos and convert them. Upon reaching their destination, the priests were murdered. Over the next three years, one of the Arctic’s most tragic stories became one of North America’s strangest and most memorable police investigations and trials. A near-perfect parable of late colonialism, as well as a rich exploration of the differences between European Christianity and Eskimo mysticism, Bloody Falls of the Coppermine possesses the intensity of true crime and the romance of wilderness adventure.

Praise For Bloody Falls of the Coppermine: Madness and Murder in the Arctic Barren Lands…

“A haunting and thoughtful account . . . a fascinating slice of forgotten history.”
–USA Today

“Compelling . . . a page-turner of the highest quality . . .This true story, filled with interesting characters interacting in a hostile world, reads like an excellent, mysterious novel.”
–Deseret Morning News

“This is a tale of misunderstanding and cross purposes, and Jenkins tells it well.”
–The Washington Post Book World

“Spellbinding . . . Jenkins [has] the reporter skills of a journalist, the cultural insights of an anthropologist and a spare yet literary style. . . . An adventure of mind-blowing drama.”
–The Vancouver Sun

MCKAY JENKINS holds degrees from Amherst, Columbia’s Graduate School of Journalism, and Princeton, where he received a Ph.D. in English. He is also the author of The Last Ridge and The White Death, and the editor of The Peter Matthiessen Reader. The Tilghman Professor of English and Journalism at the University of Delaware, Jenkins lives with his wife and two children in Baltimore.
or
Not Currently Available for Direct Purchase