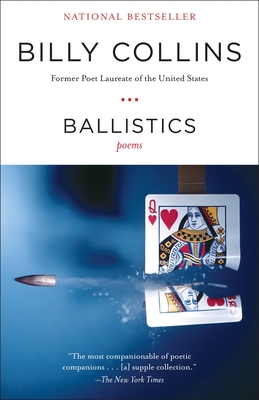 “I love the self-consciousness and humor Billy Collins brings to poetry. His poems are alive with friendly, kind regard for what-it-means-to-be-human. He's got great talent to craft lines and he does that thing that great poets do, tugging on us, reminding us to appreciate the moment we're in right now. This book was a delight to read and read again.”
— Drea Firth, Maria's Bookshop, Durango, CO
View the List

In this moving and playful collection, Billy Collins touches on an array of subjects—love, death, solitude, youth, and aging—delving deeper than ever before into the intricate folds of life.

“Collins reveals the unexpected within the ordinary. He peels back the surface of the humdrum to make the moment new.”
–The Christian Science Monitor

“Billy Collins demonstrates why he is one of our best poets, with his appealing trademark style: a self-deprecating charm, playful wit and unexpected imaginative leaps.”
–San Antonio Express-News

“By careful observation, Collins spins comic gold from the dross of quotidian suburban life. . . . Chipping away at the surface, he surprises you by scraping to the wood underneath, to some deeper truth.”
–Entertainment Weekly

“A poet of plentitude, irony, and Augustan grace.”
–The New Yorker

“It is difficult not to be charmed by Collins, and that in itself is a remarkable literary accomplishment.”
–The New York Review of Books