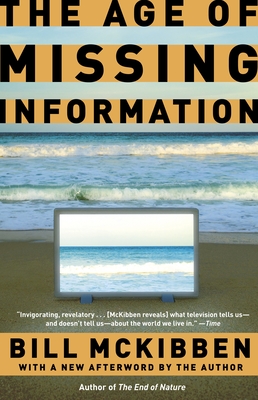 The Age of Missing Information

“Highly personal and original . . . McKibben goes beyond Marshall McLuhan’s theory that the medium is the message.”
——The New York Times

Imagine watching an entire day’s worth of television on every single channel. Acclaimed environmental writer and culture critic Bill McKibben subjected himself to this sensory overload in an experiment to verify whether we are truly better informed than previous generations. Bombarded with newscasts and fluff pieces, game shows and talk shows, ads and infomercials, televangelist pleas and Brady Bunch episodes, McKibben processed twenty-four hours of programming on all ninety-three Fairfax, Virginia, cable stations. Then, as a counterpoint, he spent a day atop a quiet and remote mountain in the Adirondacks, exploring the unmediated man and making small yet vital discoveries about himself and the world around him. As relevant now as it was when originally written in 1992–and with new material from the author on the impact of the Internet age–this witty and astute book is certain to change the way you look at television and perceive media as a whole.

“Masterful . . . a unique, bizarre portrait of our life and times.”
–Los Angeles Times

“Do yourself a favor: Put down the remote and pick up this book.”
–Houston Chronicle

Bill McKibben is the author of more than a dozen books, including The End of Nature, Enough: Staying Human in an Engineered Age, and Deep Economy. A former staff writer for The New Yorker, he writes often for Harper's Magazine, National Geographic, and the New York Review of Books, among other publications. He is the founder of the environmental organizations Step It Up and 350.org, a global-warming awareness campaign that in October 2009 coordinated what CNN called "the most widespread day of political action in the planet's history." He is a scholar in residence at Middlebury College and lives in Vermont with his wife, the writer Sue Halpern, and their daughter.
or support indie stores by buying on