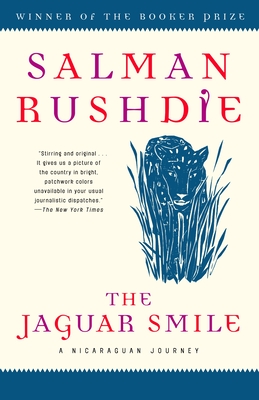 “I did not go to Nicaragua intending to write a book, or, indeed, to write at all: but my encounter with the place affected me so deeply that in the end I had no choice.” So notes Salman Rushdie in his first work of nonfiction, a book as imaginative and meaningful as his acclaimed novels. In The Jaguar Smile, Rushdie paints a brilliantly sharp and haunting portrait of the people, the politics, the terrain, and the poetry of “a country in which the ancient, opposing forces of creation and destruction were in violent collision.” Recounting his travels there in 1986, in the midst of America’s behind-the-scenes war against the Sandinistas, Rushdie reveals a nation resounding to the clashes between government and individuals, history and morality.

Praise For The Jaguar Smile: A Nicaraguan Journey…

“Stirring and original . . . It gives us a picture of the country in bright, patchwork colors unavailable in your usual journalistic dispatches.”
–The New York Times


“A vivid and probing introduction for perplexed outsiders trying to make sense of Nicaraguan dilemmas.”
–Newsday

Salman Rushdie is the author of twelve novels—Grimus, Midnight’s Children (for which he won the Booker Prize and the Best of the Booker), Shame, The Satanic Verses, Haroun and the Sea of Stories, The Moor’s Last Sigh, The Ground Beneath Her Feet, Fury, Shalimar the Clown, The Enchantress of Florence, Luka and the Fire of Life, and Two Years Eight Months and Twenty-Eight Nights—and one collection of short stories: East, West. He has also published four works of nonfiction—Joseph Anton, The Jaguar Smile, Imaginary Homelands, and Step Across This Line—and co-edited two anthologies, Mirrorwork and Best American Short Stories 2008. He is a member of the American Academy of Arts and Letters and a Distinguished Writer in Residence at New York University. A former president of PEN American Center, Rushdie was knighted in 2007 for services to literature.
Loading...
or support indie stores by buying on