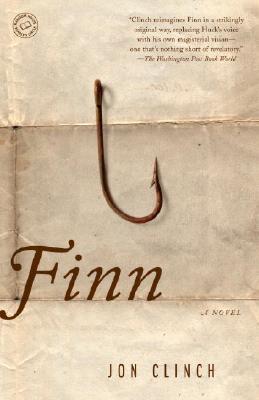 In this masterful debut by a major new voice in fiction, Jon Clinch takes us on a journey into the history and heart of one of American literature's most brutal and mysterious figures: Huckleberry Finn's father. The result is a deeply original tour de force that springs from Twain's classic novel but takes on a fully realized life of its own. Finn sets a tragic figure loose in a landscape at once familiar and mythic. It begins and ends with a lifeless body-flayed and stripped of all identifying marks-drifting down the Mississippi. The circumstances of the murder, and the secret of the victim's identity, shape Finn's story as they will shape his life and his death. Along the way Clinch introduces a cast of unforgettable characters: Finn's terrifying father, known only as the Judge; his sickly, sycophantic brother, Will; blind Bliss, a secretive moonshiner; the strong and quick-witted Mary, a stolen slave who becomes Finn's mistress; and of course young Huck himself. In daring to re-create Huck for a new generation, Clinch gives us a living boy in all his human complexity-not an icon, not a myth, but a real child facing vast possibilities in a world alternately dangerous and bright. Finn is a novel about race; about paternity in its many guises; about the shame of a nation recapitulated by the shame of one absolutely unforgettable family. Above all, Finn reaches back into the darkest waters of America's past to fashion something compelling, fearless, and new. Praise for Finn
"A brave and ambitious debut novel... It stands on its own while giving new life and meaning to Twain's novel, which has been stirring passions and debates since 1885... triumph of imagination and graceful writing.... Bookstores and libraries shelve novels alphabetically by authors' names. That leaves Clinch a long way from Twain. But on my bookshelves, they'll lean against each other. I'd like to think that the cantankerous Twain would welcome the company."
-USA TODAY

"Ravishing...In the saga of this tormented human being, Clinch brings us a radical (and endlessly debatable) new take on Twain's classic, and a stand-alone marvel of a novel. Grade: A."
-ENTERTAINMENT WEEKLY

"Haunting...Clinch reimagines Finn in a strikingly original way, replacing Huck's voice with his own magisterial vision-one that's nothing short of revelatory...Spellbinding."
-WASHINGTON POST

"Meticulously crafted...Marvelous imagination...The Finn of Clinch's novel is certainly a racist villain but also psychologically disturbed and disconcertingly compelling."
-SAN FRANCISCO CHRONICLE "From the barest of hints in Mark Twain's Huckleberry Finn, Clinch has created a fully believable world inhabited by fully realized characters. Clinch treads dangerous ground in making one of America's greatest novels his jumping-off point, but he brings it off magnificently...The language of this book is one of its great beauties...Finn is far from one-dimensional, and that is another beauty of the book. Clinch has a knack for putting us squarely inside the heads of his characters....Clinch draws as compelling and realistic a picture as any we're likely to find...Finn stands on its own. The richness of its language, the depth of its characters, the emotional and societal tangles through which they struggle to navigate add up to a portrait of life on the Mississippi as we've never before experienced it."
-dallas morning news

"His models may include Cormac McCarthy, and Charles Frazier, whose Cold Mountain also has a voice that sounds like 19th-century American (both formal and colloquial) but has a contemporary terseness and spikiness. This voice couldn't be better suited to a historical novel with a modernist sensibility: Clinch's riverbank Missouri feels postapocalyptic, and his Pap Finn is a crazed yet wily survivor in a polluted landscape...Clinch's Pap is a convincingly nightmarish extrapolation of Twain's. He's the mad, lost and dangerous center of a world we'd hate to live in-or do we still live there?-and crave to revisit as soon as we close the book."
-newsweek "I haven't been swallowed whole by a work of fiction in some time. Jon Clinch's first novel has done it: sucked me under like I was a rag doll thrown into the wake of a Mississippi steamboat...Jon Clinch has turned in a nearly perfect first book, a creative response that matches The Adventures of Huckleberry Finn in intensity and tenacious soul-searching about racism. I wish I could write well enough to construct a dramatic, subtle and mysterious story out of careful, plodding and unromantic prose, but for now I'm just happy to have an alchemist like Jon Clinch do it for me."
-BOOKSLUT "Finn strikes its most original chords in its bold imagining of possibilities left unexplored by Huckleberry Finn."
-austin american-statesman "An inspired riff on one of literature's all-time great villains...This tale of fathers and sons, slavery and freedom, better angels at war with dark demons, is filled with passages of brilliant description, violence that is close-up and terrifying...Everything in this novel could have happened, and we believe it... so the great river of stories is too, twisting and turning, inspiring such surprising and inspired riffs and tributes as Finn."
-new orleans times-picayune "A triumph of succesful plotting, convincing characterization and lyrical prose."
-ROCKY MOUNTAIN NEWS "Shocking and charming. Clinch creates a folk-art masterpiece that will delight, beguile and entertain as it does justice to its predecessor...In Finn, Clinch expands the bloodlines and scope of the original story and casts new light on the troubled legacy of our country's infamous past."
-new york post "In Clinch's retelling, Pap Finn comes vibrantly to life as a complex, mysterious, strangely likable figure...Clinch includes many sharply realized, sometimes harrowing, even gruesome scenes...Finn should appeal not only to scholars of 19th century literature but to anyone who cares to sample a forceful debut novel inspired by a now-mythic American story."
-atlanta journal-consitution "What makes bearable this river voyage that never ventures far beyond the banks is the compelling narrative Clinch has created. He writes exceedingly well, not with the immediacy Twain imbued to Huck's voice, but with an impersonal narrator's voice that almost perversely refuses to take sides. And the plot is masterful."
-fredericksburg freelance-star "Disturbing and darkly compelling...Clinch displays impressive imagination and descriptiveness...anyone who encounters Finn will long be hautned by this dark and bloody tale."
-hartford courant "Jon Clinch pulls off the near impossible in his new novel, Finn, which brings Huck's dad to life in all his terrible humanness...Clinch vividly paints the origins of the amazing Huck...powerfully told."
-winston-salem journal "Gripping...he inventively remaps known literary territory...the descriptive riffs are lucent."
-chicago tribune

"The best debut so far of 2007."
-men's journal "Inventing Huckleberry Finn's father using only the thin scraps of information that Mark Twain provided is a pretty admirable feat, and reading Jon Clinch's first novel provides an almost tactile pleasure...Clinch clearly respects Twain, but he doesn't feel especially cowed by his inspiration, and some of his inventions qualify as genuine improvements on the original text."
-washington city paper

"In this darkly luminous debut...Clinch lyrically renders the Mississippi River's ceaseless flow, while revealing Finn's brutal contradictions, his violence, arrogance and self-reproach."
-Publishers Weekly, STARRED review "Bold and deeply disturbing. . . A few incidents duplicate those in Twain,
but the novels could not be more different; instead of Huck's unlettered child's voice,
we have an omniscient narrative, grave, erudite and rich in the secretions of adult knowledge;
terse dialogue acts as an effective counterpoint. All along, Clinch's intent
is to probe the nature of evil . . . a memorable debut, likely to make waves."
-KIRKUS REVIEWS, STARRED review "Every fan of Twain's masterpiece will want to read this inspired spin-off, which could become an unofficial companion volume."
-LIBRARY JOURNAL, STARRED review "This is a bold debut that takes a few tentative steps in tandem with the familiar Twain,
but then veers off dexterously down a much more insidious, harrowing path."
-BOOKLIST "Jon Clinch's first novel Finn...succeeds wonderfully because its gritty lyricism is at once authentic and original...reminiscent at times of Cormac McCarthy...the eloquence of the telling will never make the courageous reader wish for a gentler touch. Like any appealing novel, Finn achieves the force of a dream with fascinating actions, indelible characters and spellbinding language. Its author is wily, astute and wise... Finn is a challenging and rewarding exploration of the suffering human heart. From the ominous shadow that was Pap Finn, Clinch has fashioned an unforgettable, twisted man and a marvelous novel."
-ROANOKE TIMES

"Next month Clinch makes his publishing debut with Finn, taking up where Mark Twain left Mr. Finn 120 years ago: dead in a room surrounded by such mysterious oddities as a wooden leg, women's underclothing, and two black cloth masks. It's a great read."
-Knoxville News Sentinel
From the Hardcover edition.

A native of upstate New York and a graduate of Syracuse University, Jon Clinch has taught American literature, has been creative director for a Philadelphia ad agency, and has run his own agency in the Philadelphia suburbs. His stories have appeared in John Gardner's MSS. magazine. He and his wife have one daughter. From the Hardcover edition.
Loading...
or
Not Currently Available for Direct Purchase