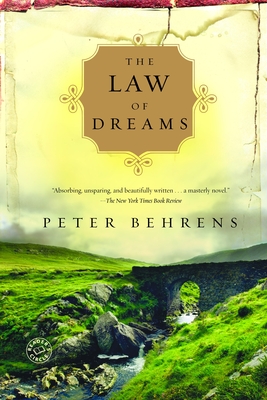 The Law of Dreams (Paperback)

Driven from the only home he has known during Ireland’s Great Hunger of 1847, Fergus O’Brien makes the harrowing journey from County Clare to America, traveling with bold girls, pearl boys, navvies, and highwaymen. Along the way, Fergus meets his three passionate loves–Phoebe, Luke, and Molly–vivid, unforgettable characters, fresh and willful.

Based on Peter Behrens’s own family history, The Law of Dreams is lyrical, emotional, and thoroughly extraordinary–a searing tale of ardent struggle and ultimate perseverance.

Peter Behrens's first novel, The Law of Dreams, won the Governor General’s Award, Canada’s most prestigious book prize, and has been published in nine languages. The New York Times Book Review called his second novel, The O’Briens, “a major accomplishment.” He is also the author of the novel Carry Me and two collections of short stories, Night Driving and Travelling Light. His stories and essays have appeared in The Atlantic, The New York Times, and many anthologies. Awards he has received include a Wallace Stegner Fellowship in Creative Writing at Stanford University. A native of Montreal, he is currently a fellow at Harvard University’s Radcliffe Institute for Advanced Study.

Praise For The Law of Dreams: A Novel…

“Stunningly lyric . . . a work of richly empathetic imagination that reminds us once again of how powerful historical fiction can be in skilled hands.”
–Los Angeles Times

“Superb . . . an emotional epic bearing echoes of Melville and Ondaatje, conveying scents and shimmers of a vanished world under the skin of our own.”
–Jonathan Lethem, author of You Don’t Love Me Yet

“Extraordinary . . . a novel that animates the past this vibrantly should make volumes of mere history blush.”
–The Washington Post Book World

“Sprawling, cinematic, exquisitely detailed, exactingly researched, and keenly felt . . . a powerful work of excavation that achieves what historical fiction often can’t–credibility, along with a sense of the transportive.”
–Boston Phoenix

“A beautifully written, poetically inspired tale of heroism, love, yes and sex, and the triumph of the human spirit.”
–Malachy McCourt, author of A Monk Swimming
or support indie stores by buying on
Copyright © 2020 American Booksellers Association