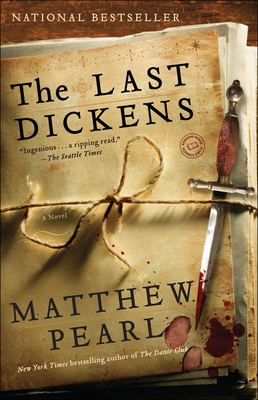 Boston, 1870. When news of Charles Dickens’s sudden death reaches his struggling American publisher, James Osgood sends his trusted clerk, Daniel Sand, to await the arrival of Dickens’s unfinished final manuscript. But Daniel never returns, and when his body is discovered by the docks, Osgood must embark on a quest to find the missing end to the novel and unmask the killer. With Daniel’s sister Rebecca at his side, Osgood races the clock through a dangerous web of opium dens, sadistic thugs, and literary lions to solve a genius’s last mystery and save his own–and Rebecca’s–lives.

Praise For The Last Dickens: A Novel…

“Pearl’s plot is ambitious and satisfying, involving a murder and a missing manuscript, the opium trade, the emerging publishing business In New York and Boston, and the predicament of single, divorced women in America in the 19th century. Fans of Dickens will appreciate Pearl’s literary allusions and his thoroughly researched characterizations…”—Milwaukee Journal Sentinel

Matthew Pearl is the New York Times bestselling author of The Dante Club, The Poe Shadow, The Last Dickens, The Technologists, The Last Bookaneer, and The Dante Chamber, and the editor of the Modern Library editions of Dante’s Inferno (translated by Henry Wadsworth Longfellow) and Edgar Allan Poe’s The Murders in the Rue Morgue: The Dupin Tales. His books have been translated into more than thirty languages, and his nonfiction writing has appeared in The New York Times, The Wall Street Journal, The Boston Globe, and Slate.
Loading...
or
Not Currently Available for Direct Purchase