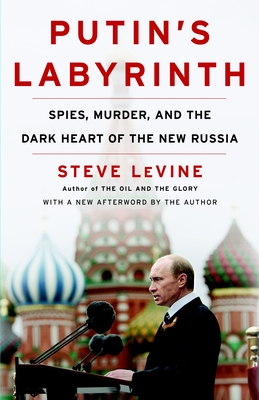 Spies, Murder, and the Dark Heart of the New Russia

“A riveting look at today’s Russia under the leadership of Vladimir Putin.”—The Kingston Observer

In Putin’s Labyrinth, acclaimed journalist Steve LeVine, who lived in and reported from the former Soviet Union for more than a decade, provides a gripping account of modern Russia. In a penetrating narrative that recounts the lives and deaths of six Russians, LeVine portrays the growth of a “culture of death”—from targeted assassinations of the state’s enemies to the Kremlin’s indifference when innocent hostages are slaughtered. Interviews with eyewitnesses and the families and friends of these victims reveal how Russians manage to negotiate their way around the ever-present danger of violence and the emotional toll that this lethal maze is exacting on ordinary people. The result is a fresh way of assessing the forces that are driving this major new confrontation with the West.

Praise For Putin's Labyrinth: Spies, Murder, and the Dark Heart of the New Russia…

“If Steve LeVine’s aim in his new book, Putin’s Labyrinth, was to chill us to the marrow about post-communist Russia, he has succeeded. . . . LeVine’s investigations and interviews are thorough and his conclusions sober.”—Chicago Tribune

“Putin’s Labyrinth is an extremely readable account that is as timely as today’s news stories. I recommend it without reservation.”—David M. Kinchen, Huntington News

“[A] hot-off-the-presses exposé . . . LeVine’s important take on the all-too-real machinations and bloodthirstiness from which espionage thrillers are made is both unnerving and intriguing.”—Booklist

Steve LeVine is the author of The Oil and the Glory: The Pursuit of Empire and Fortune on the Caspian Sea. He is the chief foreign affairs writer for BusinessWeek and is based in Washington, D.C. He was a foreign correspondent for eighteen years, posted in the Soviet Union, Pakistan, and the Philippines, reporting for The Wall Street Journal, The New York Times, Newsweek, Financial Times, and other publications.
Loading...
or
Not Currently Available for Direct Purchase