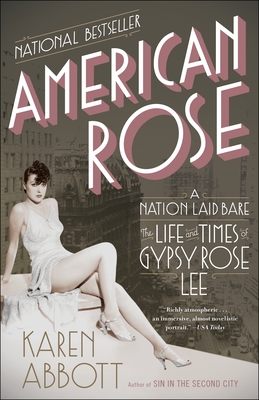 A Nation Laid Bare: The Life and Times of Gypsy Rose Lee

“Reading American Rose, you can almost hear the clink of champagne glasses and the excited buzz of a full house at the Minsky brothers' famous burlesque club -- the place where the shy Rose Louise Hovick evolved into enigmatic burlesque star Gypsy Rose Lee. Abbott uncovers tales of her famously manipulative mother and a childhood lost to vaudeville before she becomes the 'most private public figure' in America. This is a compelling, vivid homage to the Roaring Twenties.”
— Beth Champion, The Velveteen Rabbit Bookshop, Fort Atkinson, WI
View the List

America was flying high in the Roaring Twenties. Then, almost overnight, the Great Depression brought it crashing down. When the dust settled, people were primed for a star who could distract them from reality. Enter Gypsy Rose Lee, a strutting, bawdy, erudite stripper who possessed a gift for delivering exactly what America needed. With her superb narrative skills and eye for detail, Karen Abbott brings to life an era of ambition, glamour, struggle, and survival. Using exclusive interviews and never-before-published material, she vividly delves into Gypsy’s world, including her intense triangle relationship with her sister, actress June Havoc, and their formidable mother, Rose, a petite but ferocious woman who literally killed to get her daughters on the stage. Weaving in the compelling saga of the Minskys—four scrappy brothers from New York City who would pave the way for Gypsy Rose Lee’s brand of burlesque and transform the entertainment landscape—Karen Abbott creates a rich account of a legend whose sensational tale of tragedy and triumph embodies the American Dream.


Praise For American Rose: A Nation Laid Bare: The Life and Times of Gypsy Rose Lee…

“American Rose is a fitting tribute to an amazing woman, telling her story beautifully while revealing as much about post-Depression America as it does about celebrity life. It’s cultural history at its best.”—Rebecca Skloot, New York Times bestselling author of The Immortal Life of Henrietta Lacks

“Abbott creates a brainy striptease similar to the one her subject may have performed.”—Newsday

“With staggeringly in-depth research . . . Abbott composes a story wrought with personal drama and insight into a dark era in American history. . . . The story is as beguiling as it is timeless.”—Elle

“At its core, American Rose is a haunting portrait of a woman . . . offering her audiences a sassy, confident self while making sure they would never know the damaged soul who created her.”—Los Angeles Times

“Sad, smart, brassy . . . the true story of the Queen of Burlesque is even weirder and wilder than the legend.”—Salon