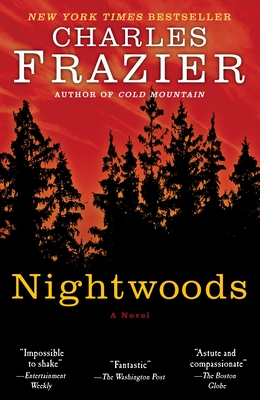 Charles Frazier, the acclaimed author of Cold Mountain and Thirteen Moons, returns with a dazzling novel set in small-town North Carolina in the early 1960s. With his brilliant portrait of Luce, a young woman who inherits her murdered sister’s troubled twins, Frazier has created his most memorable heroine. Before the children, Luce was content with the reimbursements of the rich Appalachian landscape, choosing to live apart from the small community around her. But the coming of the children changes everything, cracking open her solitary life in difficult, hopeful, dangerous ways. In a lean, tight narrative, Nightwoods resonates with the timelessness of a great work of art.


Praise For Nightwoods: A Novel…

“Incantatory prose . . . unexpected twists of plot . . . a look at the nature of good and evil and how those forces ebb and flow over time.”—The Atlanta Journal-Constitution

“Nightwoods propels forward at a suspenseful clip. . . . It is Frazier’s verisimilitude of North Carolina backwoods and how this particular place shapes his characters and their footing in his imagined world that bring this story alive.”—San Francisco Chronicle

“Wonderful . . . There’s a dreamy spell set in motion by Frazier’s devotion to his native Appalachians. To read this book is to disappear deep into a meticulously created landscape.”—The Christian Science Monitor

“A gorgeously written thriller, as brutal and unflinching yet tender and merciful as nature itself.”—Richmond Times-Dispatch

“A gritty new beauty of a novel . . . Its hero is a woman named Luce, and no woman could write a female character who rings any truer.”—The Philadelphia Inquirer

Charles Frazier grew up in the mountains of North Carolina. Cold Mountain, his highly acclaimed first novel, was an international bestseller and won the National Book Award in 1997. His second novel, Thirteen Moons, was a New York Times bestseller and named a best book of the year by the Los Angeles Times, Chicago Tribune, and St. Louis Post-Dispatch.
Loading...
or support indie stores by buying on