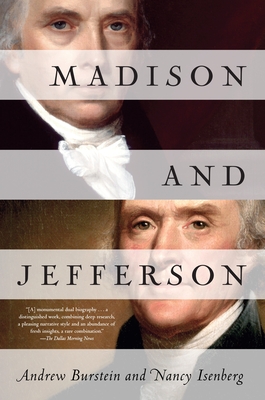 The third and fourth presidents have long been considered proper gentlemen, with Thomas Jefferson’s genius overshadowing James Madison’s judgment and common sense. But in this revelatory book about their crucial partnership, both are seen as men of their times, hardboiled operatives in a gritty world of primal politics where they struggled for supremacy for more than fifty years. With a thrilling and unprecedented account of early America as its backdrop, Madison and Jefferson reveals these founding fathers as privileged young men in a land marked by tribal identities rather than a united national personality. Esteemed historians Andrew Burstein and Nancy Isenberg capture Madison’s hidden role—he acted in effect as a campaign manager—in Jefferson’s career. In riveting detail, the authors chart the courses of two very different presidencies: Jefferson’s driven by force of personality, Madison’s sustained by a militancy that history has been reluctant to ascribe to him.

Supported by a wealth of original sources—newspapers, letters, diaries, pamphlets—Madison and Jefferson is a watershed account of the most important political friendship in American history.

“Enough colorful characters for a miniseries, loaded with backstabbing (and frontstabbing too).”—Newsday

Praise For Madison and Jefferson…

“A superb book that greatly deepens our understanding of these founders.”—Kirkus Reviews (starred review)

“Enough colorful characters for a miniseries, loaded with backstabbing (and frontstabbing too).”—Newsday

“A richly detailed account . . . that humanizes its subjects.”—Tulsa World

“A remarkably lucid account . . . With stunning style and clarity, [Burstein and Isenberg have] meticulously reexamined this political relationship.”—Library Journal

Andrew Burstein and Nancy Isenberg are Charles P. Manship Professor of History and professor of history, respectively, at Louisiana State University. Burstein is the author of six other books on early America, including The Passions of Andrew Jackson and Jefferson’s Secrets. Isenberg is the author of two prizewinning books, Fallen Founder: The Life of Aaron Burr and Sex and Citizenship in Antebellum America.
Loading...
or
Not Currently Available for Direct Purchase