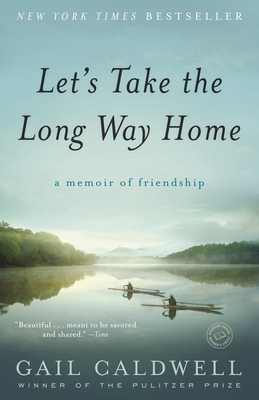 A Memoir of Friendship

“This is the heart-warming and heart-wrenching story of the author's deep friendship with writer Caroline Knapp. Through rowing, swimming, writing, their dogs, and sharing life experiences, they nurture a connection that we would all love to have with someone. An honest and unforgettable tribute to best friends.”
— Ellen Jarrett, Porter Square Books, Cambridge, MA
View the List

“This is the heart-warming and heart-wrenching story of the author's deep friendship with writer Caroline Knapp. Through rowing, swimming, writing, their dogs, and sharing life experiences, they nurture a connection that we would all love to have with someone. An honest and unforgettable tribute to best friends.”
— Ellen Jarrett, Porter Square Books, Cambridge, MA
View the List

They met over their dogs. Gail Caldwell and Caroline Knapp (author of Drinking: A Love Story) became best friends, talking about everything from their love of books and their shared history of a struggle with alcohol to their relationships with men. Walking the woods of New England and rowing on the Charles River, these two private, self-reliant women created an attachment more profound than either of them could ever have foreseen. Then, several years into this remarkable connection, Knapp was diagnosed with cancer. With her signature exquisite prose, Caldwell mines the deepest levels of devotion, and courage in this gorgeous memoir about treasuring a best friend, and coming of age in midlife. Let’s Take the Long Way Home is a celebration of the profound transformations that come from intimate connection—and it affirms, once again, why Gail Caldwell is recognized as one of our bravest and most honest literary voices.


Praise For Let's Take the Long Way Home: A Memoir of Friendship…

“A near-perfect memoir: beautiful, humble, intimate and filled with piercing insights.  Meant to be savored and shared.”—Time

“Stunning . . . gorgeous . . . intense and moving . . . A book of such crystalline truth that it makes the heart ache.”—The Boston Globe

“Female friendships is the beating heart of this book. . . . [Gail Caldwell describes] both the very best that women can be together and the precious things they can, if they wish, give back to one another: power, humor, love and self-respect.”—Julie Myerson, The New York Times Book Review, Editor’s Choice

“[A] beautiful book . . . The losing isn’t the exceptional part of this story; everyone loses something, sooner or later.  The wonder lies in finding it in the first place.”—Salon

“A tribute to the enduring power of friendship . . . You can shelve Let’s Take the Long Way Home . . . next to The Year of Magical Thinking, Joan Didion’s searing memoir about losing her husband to heart failure. But that’s assuming it makes it to your shelf: This is a book you’ll want to share with your own ‘necessary pillars of life,’ as Caldwell refers to her nearest and dearest. . . . A lovely gift to readers.”—Washington Post

“[Their] relationship nurtured and inspired Caldwell and Knapp, and in reading about it, we feel enriched as well.”—Chicago Tribune, Editor’s Choice

“Universal . . . [Caldwell] taps the joys of communion with a soulmate.”—Los Angeles Times

“A heartbreaker of a memoir . . . With humor and sadness . . . Caldwell gracefully weaves a thread of stories that describe and ponder friendship and loss.”—USA Today

“Caldwell’s graceful account ensures that Knapp will be remembered not just for her tragic death but for her vigorous, rich life.”—Parade

SELECTED AS ONE OF THE BEST BOOKS OF THE YEAR BY
The Washington Post • Los Angeles Times • USA Today • San Francisco Chronicle • O: The Oprah Magazine • The Christian Science Monitor • Publishers Weekly

Gail Caldwell is the former chief book critic for The Boston Globe, where she was a staff writer and critic for more than twenty years. In 2001, she was awarded the Pulitzer Prize for Criticism. She is also the author of A Strong West Wind, a memoir of her native Texas. Caldwell lives in Cambridge, Massachusetts.

The book’s subtitle is “A Memoir of Friendship.” Why it is not simply “A Memoir,” and what does this say about the book as a whole? Whose story, at heart, would you say this is?

Caldwell writes, “Finding Caroline was like placing a personal ad for an imaginary friend, then having her show up at your door funnier and better than you had conceived.” She goes on to describe their “tatting center,” and the secret codes that tied their lives together. To what degree do you think the strength of a friendship depends on being able to disappear into an imaginary world together, to develop a secret code that only the friends understand? How do you see this playing out in Let’s Take the Long Way Home? What about in your own life?

Gail and Caroline have a great deal in common, but they also have very different personalities. There is a darker edge to their friendship, too: Caldwell calls it a “swampland,” “the world of envy and rivalry and self-doubt,” the competitiveness between the two women in their writing, on the water, and in life. In what ways are they similar, and in what ways different? Do you think these elements strengthen or weaken their bond?

Both Gail and Caroline have relationships with men, and yet the core of their friendship seems to contain a singular intimacy of the kind that exists between women.   Does that bond call to mind friendships or relationships in your own life?

In a scene on the Harvard University sports fields, Caldwell says, “We used to laugh that people with common sense or without dogs were somewhere in a warm restaurant, or traveling, or otherwise living the sort of life that all of us think, from time to time, that we ought to be living or at least desiring.” One of the things Gail and Caroline discuss in the course of their friendship is whether they are “living their lives correctly”—whether they are taking full advantage of the time they have. Do you think there is a “correct” way to live, and if so, what do you think should dictate the priorities? Is it realistic to try to avoid wasting time, or is that necessary to “correct living”? Do you think Let’s Take the Long Way Home offers any kind of answer to this question?

“What they never tell you about grief is that missing someone is the simple part.” What do you think Caldwell means by this?

In what ways does Clementine’s arrival change Gail’s life, on both a practical and an emotional level? She compares dog ownership to having children, but makes the point that “this mysterious, intelligent animal I had brought into my life seemed to me not a stand-in, but a blessing.”

As the author is struggling to overcome her alcoholism, she has two conversations that help change the way she sees the world and her experiences. In one, a therapist tells her that “If…I could keep only one thing about you, it would be your too-muchness.”  Later, her alcoholism counselor, Rich, says, “Don’t you know? The flaw is the thing we love.”  Do you agree? Can you think of examples, in the book or in your own life, that prove or disprove these ideas?

Let’s Take the Long Way Home doesn’t have a memoir’s traditional, chronological narrative structure. How do you think this contributes to the effect and emotional impact of the book overall? Does it reflect the nature of the friendship itself? Could Caldwell have told her story any other way?

Do you see Gail, as a character, change in the course of the book—having discovered, and then lost, both Caroline and Clementine? What would you say she has gained?

Caldwell tells a moving anecdote about using the “alpha roll” while she is training Clementine. It is a technique meant to establish the dog owner’s authority, but it doesn’t work at all on the mischievous puppy; as she continues to try and fail, Caldwell suddenly sees a parallel between her own childhood relationship with her father and senses that the whole approach is wrong. “From that moment on, everything changed between us. Wherever I danced, she followed.”  What lessons might we all learn from this story?

Loss is at the center of the book —we know from the first several pages that Caroline will die —and Caldwell writes about the new world without Caroline in it, where she experienced rage and despair and “the violence of time itself.”   Does her description of grief mirror any of your own experiences?

Caroline and Gail have a private game in which they assign a dog breed to each person they know. For fun, what kind of dog would you be? What about your best friend? Your worst enemy?