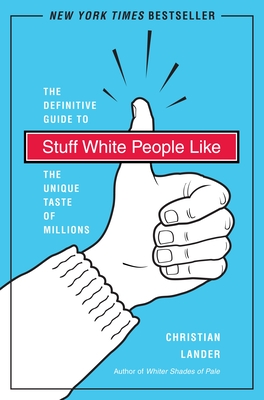 A Definitive Guide to the Unique Taste of Millions

They love nothing better than sipping free-trade gourmet coffee, leafing through the Sunday New York Times, and listening to David Sedaris on NPR (ideally all at the same time). Apple products, indie music, food co-ops, and vintage T-shirts make them weak in the knees.

They believe they’re unique, yet somehow they’re all exactly the same, talking about how they “get” Sarah Silverman’s “subversive” comedy and Wes Anderson’s “droll” films. They’re also down with diversity and up on all the best microbrews, breakfast spots, foreign cinema, and authentic sushi. They’re organic, ironic, and do not own TVs.

You know who they are: They’re white people. And they’re here, and you’re gonna have to deal. Fortunately, here’s a book that investigates, explains, and offers advice for finding social success with the Caucasian persuasion. So kick back on your IKEA couch and lose yourself in the ultimate guide to the unbearable whiteness of being.

“The best of a hilarious Web site: an uncannily accurate catalog of dead-on predilections. The Criterion Collection of classic films? Haircuts with bangs? Expensive fruit juice? ‘Blonde on Blonde’ on the iPod? The author knows who reads The New Yorker and who wears plaid.”
–Janet Maslin’s summer picks, CBS.com

“The author of "Stuff White People Like" skewers the sacred cows of lefty Caucasian culture, from the Prius to David Sedaris. . . . It gently mocks the habits and pretensions of urbane, educated, left-leaning whites, skewering their passion for Barack Obama and public transportation (as long as it's not a bus), their idle threats to move to Canada, and joy in playing children's games as adults. Kickball, anyone?”
–Salon.com

“A handy reference guide with which you can check just how white you are. Hint: If you like only documentaries and think your child is gifted, you glow in the dark, buddy.”
–NY Daily News

Christian Lander is the creator of the website Stuff White People Like. He is a Ph.D. dropout who was the 2006 public speaking instructor of the year at Indiana University. He has lived in Toronto, Montreal, Copenhagen, Tucson, Indiana, and now Los Angeles, where he lives with his wife, Jess, a photographer who contributed many of the photos in the book.
Loading...
or
Not Currently Available for Direct Purchase