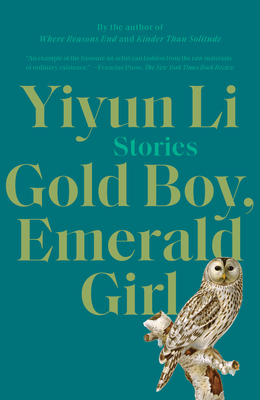 In these spellbinding stories, Yiyun Li, a Hemingway Foundation/PEN Award winner, a MacArthur Fellow, and one of The New Yorker’s top 20 fiction writers under 40, gives us exquisite stories in which politics and folklore magnificently illuminate the human condition. A professor introduces her middle-aged son to a favorite student, unaware of the student’s true affections. A lifelong bachelor finds kinship with a man wrongly accused of an indiscretion. Six women establish a private investigating agency to battle extramarital affairs in Beijing. Written in lyrical prose and with stunning honesty, Gold Boy, Emerald Girl introduces us to worlds strange and familiar, creating a mesmerizing and vibrant landscape of life.

“[Resonates] with emotion . . . Gold Boy, Emerald Girl is an example of the treasure an artist can fashion from the raw materials of ordinary existence.”—Francine Prose, The New York Times Book Review

“A moving and unforgettable  experience . . . Yiyun Li’s characters, like the stories they inhabit, often seem at first glance quiet, modest and unassuming. [But] there is considerable drama hidden beneath the placid surfaces they present to the world.”—The Washington Post

“Yiyun Li is a marvel. . . . Her writing is lyrical, circular and finely etched, with an emotional impact that both satisfies and surprises.”—NPR

“Li has been called ‘China’s Chekhov,’ and it’s easy to see why: With their quiet authority, exquisite control, and illumination of those quicksilver moments on which entire lives pivot, [her] tales lodge in your rib cage long after you’ve finished reading.”—Marie Claire

Yiyun Li is the author of six works of fiction—Must I Go, Where Reasons End, Kinder Than Solitude, A Thousand Years of Good Prayers, The Vagrants, and Gold Boy, Emerald Girl—and the memoir Dear Friend, from My Life I Write to You in Your Life. She is the recipient of many awards, including a PEN/Hemingway Award, a PEN/Jean Stein Book Award, a MacArthur Foundation fellowship, and a Windham-Campbell Prize, and was featured in The New Yorker’s 20 Under 40 fiction issue. Her work has appeared in The New Yorker, A Public Space, The Best American Short Stories, and The O. Henry Prize Stories, among other publications. She teaches at Princeton University and lives in Princeton, New Jersey.