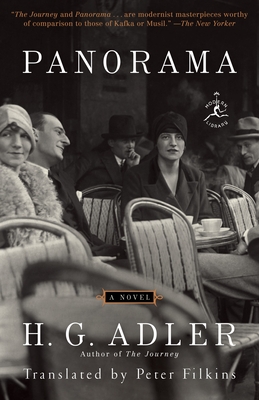 Only recently available for the first time in English, Panorama is the newly rediscovered first novel of H. G. Adler, a modernist master whose work has been compared to that of Kafka, Joyce, and Solzhenitsyn. A brilliant epic told in ten distinct vignettes, Panorama is a portrait of a place and people soon to be destroyed, as seen through the eyes of the young Josef Kramer. It moves from the pastoral World War I–era Bohemia of Josef’s youth, to a German boarding school full of creeping prejudice, through an infamous extermination camp, and finally to Josef’s self-imposed exile abroad, achieving veracity and power through a stream-of-consciousness style reminiscent of our greatest modern masters. The author of six novels as well as the monumental account of his experiences in a Nazi labor camp, Theresienstadt 1941–1945, H. G. Adler is an essential author with unique historical importance. Panorama is lasting evidence of both the torment of his life and the triumph of his gifts.

H. G. Adler was the author of twenty-six books of fiction, poetry, philosophy, and history. Born in Prague in 1910, Adler was a survivor of the Holocaust. He later settled in England and began writing about his experience. Adler died in London in 1988.

Peter Filkins is an acclaimed translator and the recipient of a Berlin Prize fellowship from the American Academy in Berlin. He teaches writing and literature at Bard College at Simon’s Rock in Great Barrington, Massachusetts.

“The Journey and Panorama . . . are modernist masterpieces worthy of comparison to those of Kafka or Musil.”—The New Yorker

“Haunting . . . as remarkable for its literary experimentation as for its historical testimony.”—San Francisco Chronicle

“Panorama should have been the brilliant debut of a major German writer. . . . It’s hard to fathom why we had to wait so long. . . . Under any circumstances, let alone such harsh ones, his accomplishments would be remarkable.”—The New York Times Book Review (Editor’s Choice)

“Astonishing . . . Works such as Solzhenitsyn’s One Day in the Life of Ivan Denisovich, Primo Levi’s If This Is a Man and H. G. Adler’s . . . Panorama draw the strength of their narrative from direct memory.”—Simon Schama, Financial Times