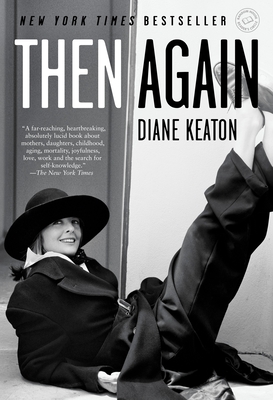 The trade paperback edition of Diane Keaton’s unforgettable memoir includes a new Afterword about the bonds between mother and daughter.

NAMED ONE OF THE TEN BEST BOOKS OF THE YEAR BY
Janet Maslin, The New York Times • People • Vogue

Mom loved adages, quotes, slogans. There were always little reminders pasted on the kitchen wall. For example, the word THINK. I found THINK thumbtacked on a bulletin board in her darkroom. I saw it Scotch-taped on a pencil box she’d collaged. I even found a pamphlet titled THINK on her bedside table. Mom liked to THINK.

So begins Diane Keaton’s unforgettable memoir about her mother and herself. In it you will meet the woman known to tens of millions as Annie Hall, but you will also meet, and fall in love with, her mother, the loving, complicated, always-thinking Dorothy Hall. To write about herself, Diane realized she had to write about her mother, too, and how their bond came to define both their lives. In a remarkable act of creation, Diane not only reveals herself to us, she also lets us meet in intimate detail her mother. Over the course of her life, Dorothy kept eighty-five journals—literally thousands of pages—in which she wrote about her marriage, her children, and, most probingly, herself. Dorothy also recorded memorable stories about Diane’s grandparents. Diane has sorted through these pages to paint an unflinching portrait of her mother—a woman restless with intellectual and creative energy, struggling to find an outlet for her talents—as well as her entire family, recounting a story that spans four generations and nearly a hundred years.

Praise For Then Again…

“For anyone looking to join one woman’s—albeit a famous woman’s—touching and funny journey into the vortex that is the parent-child relationship, Then Again features an especially honest tour guide.”—USA Today

“Although peek-behind-the-curtain moments are delicious—Woody Allen! Warren Beatty! Jack Nicholson! . . . this is a [memoir] about a mother and a daughter, with insights and confessions and lessons to which all readers can relate.”—The Wall Street Journal

“A poem about women living in one another’s not uncomplicated memories. . . . Part of what makes Diane Keaton’s memoir, Then Again, truly amazing is that she does away with the star’s ‘me’ and replaces it with a daughter’s ‘I.’ ”—Hilton Als, The New Yorker

“Then Again reads like the diary of an ordinary woman who suddenly became a movie star, who doesn’t quite believe any of it happened, but it did.”—Los Angeles Times

Diane Keaton has starred in some of the most memorable movies of the past forty years, including the Godfather trilogy, Annie Hall, Manhattan, Reds, Baby Boom, The First Wives Club, and Something’s Gotta Give. Her many awards include the Golden Globe and the Academy Award. Keaton lives with her daughter and son in Los Angeles.
Loading...
or
Not Currently Available for Direct Purchase