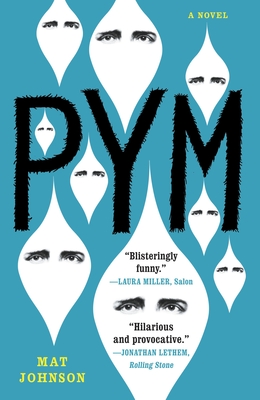 “THE SHARPEST AND MOST UNUSUAL STORY I READ LAST YEAR . . . [Mat] Johnson’s satirical vision roves as freely as Kurt Vonnegut’s and is colored with the same sort of passionate humanitarianism.”—Maud Newton, New York Times Magazine

NAMED ONE OF THE BEST BOOKS OF THE YEAR BY The Washington Post • Vanity Fair • Houston Chronicle • The Seattle Times • Salon • National Post • The A.V. Club

Recently canned professor of American literature Chris Jaynes has just made a startling discovery: the manuscript of a crude slave narrative that confirms the reality of Edgar Allan Poe’s strange and only novel, The Narrative of Arthur Gordon Pym of Nantucket. Determined to seek out Tsalal, the remote island of pure and utter blackness that Poe describes, Jaynes convenes an all-black crew of six to follow Pym’s trail to the South Pole, armed with little but the firsthand account from which Poe derived his seafaring tale, a bag of bones, and a stash of Little Debbie snack cakes. Thus begins an epic journey by an unlikely band of adventurers under the permafrost of Antarctica, beneath the surface of American history, and behind one of literature’s great mysteries.

“Imagine Kurt Vonnegut having a beer with Ralph Ellison and Jules Verne.”—Vanity Fair

“Screamingly funny . . . Reading Pym is like opening a big can of whoop-ass and then marveling—gleefully—at all the mayhem that ensues.”—Houston Chronicle

Praise For Pym: A Novel…

"BLISTERINGLY FUNNY...a full-fledged and fiendishly inventive inversion of Poe's [Pym], a series of bizarre encounters I can't bring myself to spoil, each one more deliciously pointed than the last." – Laura Miller, Salon

"SCREAMINGLY FUNNY...there's no shortage of thought and scholarship and experience underpinning Pym, but Johnson doesn't let any of it bog him down. On the contrary, reading Pym is like opening A BIG CAN OF WHOOP-ASS and then marveling -- gleefully -- at all the mayhem that ensues." – Maggie Galehouse, Houston Chronicle

"RELENTLESSLY ENTERTAINING...It’s no easy task to balance social satire against life-threatening adventure, the allegory against the gory, but Johnson’s hand is steady and his ability to play against Poe’s text masterly.  The book is polyphonous and incisive, an uproarious and hard-driving journey." – New York Times Book Review

"RIOTOUS...Jaynes never learns much about the white pathology and mindset, but Mr. Johnson knows plenty about the character types he skewers." – Wall Street Journal

“LOONY, disrespectful, and sharp, Johnson's Pym is a welcome riff on the surrealistic shudder-fest that is Poe's original…I'll stop there, but Johnson's inventiveness never does.“ – NPR’s “Fresh Air”

"Mat Johnson's new novel is nothing short of fantastic, in every sense.  I fell in love with the voice, the tone and the world of Pym.  This is an adventure novel, a work of historical and social commentary, a rumination on identity.  The only problem I could find with this novel is that I didn't write it.  It's a beautiful piece of work."
--Percival Everett, author of I Am Not Sidney Poitier

"Mat Johnson has come here to chew bubble gum and kick ass, and he's all out of bubble. gum. Pym is an adventure, a satire, and a bracing political debate all rolled into one brilliant novel. Edgar Allen Poe has inspired many authors but Mat Johnson has the inspired audacity to both honor and discredit the man, often in the same sentence. I imagine Poe choking on half the things Johnson writes in this novel, and tipping his tiny hat in admiration to the rest."
--Victor LaValle, author of Big Machine

“PYM reframes far more than Poe – it reframes everything American, from the whiteness of Ahab’s whale to Detroit bus drivers; from DNA testing to tenure review; from the Gatsbyesque dream of romantic love to the dream of Utopia; from our fear of life to our love of death.   No one today writes inside the brilliant black mind better.”
--Alice Randall, author of The Wind Done Gone and Rebel Yell

“Social criticism rubs shoulders with cutting satire in this high-concept adventure… [PYM] is caustically hilarious as it offers a memorable take on America's ‘racial pathology’ and ‘the whole ugly story of our world.’”
--Publishers Weekly, starred review

You can trust the veracity of this account: Mat Johnson’s Pym is a spectacularly sly and nimble-footed send-up of this world, the next world, and all points in between. A satire with heart, as courageous as it is cunning.” --Colson Whitehead, author of Sag Harbor

“This extension of Poe’s adventure is a romp that surprises on every page. Funny, insightful...Pym is a death-defying adventure.” – Booklist

“Mat Johnson writes with all the probing intelligence of James Baldwin, the scalding satire of Dany Laferriere and the technique of a master craftsman, all of which make him one of the most exciting, important and gifted writers of his generation. Pym is a moving and accomplished novel.” -- Chris Abani, author of GraceLand and the Virgin of Flames.

Mat Johnson was born and raised in Philadelphia, and has lived most of his life elsewhere. He is the author of several novels and graphic novels including Drop, Hunting in Harlem, and Incognegro. Johnson is a faculty member at the University of Houston Creative Writing Program and lives in Texas with his wife and children.
Loading...
or support indie stores by buying on